Weird Buildings Around the World

There’s no denying that architects can sometimes get quite outlandish with their building designs.

In Australia, you’ll find the spaceship-looking Shine Dome in Canberra and of course Sydney offers up the Opera House which has gone on to become our nation’s most recognised manmade structure.

While these buildings 05/be a bit peculiar, they are nothing compared to some of the strange buildings found throughout the world.We’ve drawn up a list of some of the world’s weirdest buildings that you 05/need to see to believe.

Whichever structures you plan on visiting, remember that building the best holiday begins with purchasing a comprehensive travel insurance policy. 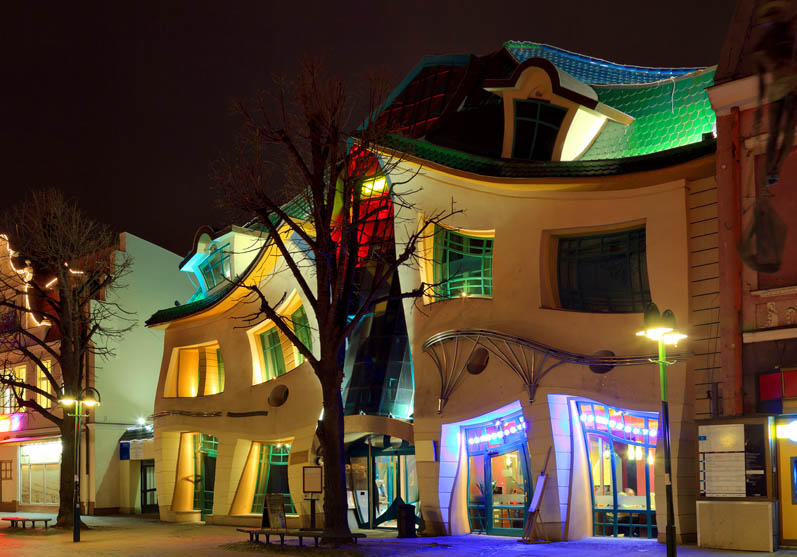 The Crooked House, or Krzywy Domek as it is known locally, is situated in the city of Sopot in Northern Poland.

This dramatically warped building is part of the Rezydent shopping centre and looks as though it is either melting or is being subjected to a crazy photo filter.

Built in 2004, this 4,000-square-metre oddity of a building was inspired by Polish fairy tales and it houses a number of restaurants, cafes, and specialty shops inside.

You’ll have a difficult time finding a straight edge in this exceptionally curvy building, but you can easily see autographs of famous Polish celebrities who have left their mark on the ground floor’s Wall of Fame. 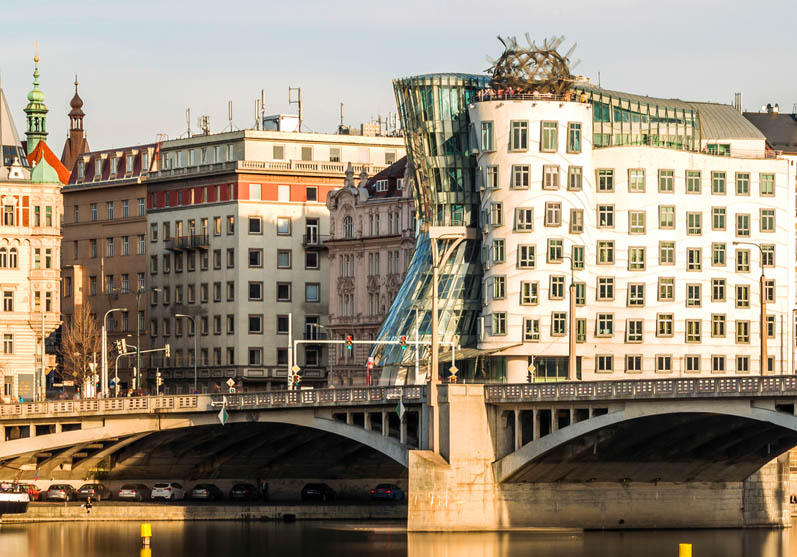 Clashing with Prague’s Baroque and Gothic architecture, Czech Republic’s Dancing House is an oddly shaped building whose two main towers look as though they are dancing together.

This feature of the building led to the architect originally wanting to name the building after Fred Astaire and his Hollywood co-star and dancing partner Ginger Rogers. The building sits on the site of a former home that was bombed by the Allied powers during WWII.

Today, visitors can take in great views over Prague by heading up to the Dancing House’s elevated terrace lookout area. You can also reserve a seat at the Ginger and Fred Restaurant that is located on the top floor or check out the art gallery that is on site. 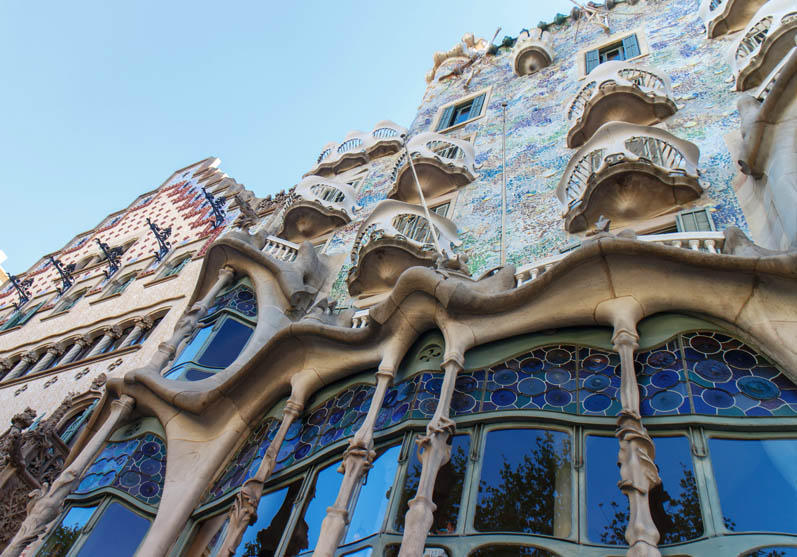 Barcelona is home to many masterpieces of the Spanish architect Antoni Gaudí. Gaudí 05/be most notable for being the man behind Barcelona’s remarkable Sagrada Família Roman Catholic church.

The city is also home to the eccentric La Pedrera building, once known as Casa Milà after the businessman that commissioned Gaudí to build it. This grey stone house features Gaudí’s famous parabolic arches, wrought iron balconies, and numerous wild-looking chimneys on top.

Visitors can tour the 4,500-square-metre home that covers five storeys. You will get a closer look at the chimneys on the Warrior Rooftop and can check out other areas such as the Whale Attic, Tenants’ Apartment, and several courtyards. 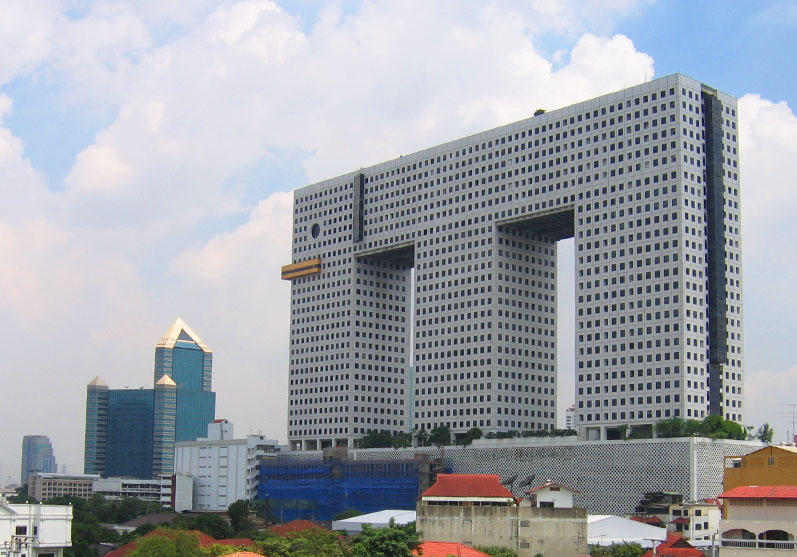 As if real elephants weren’t large enough, Bangkok had to go and display a 100-metre-tall building in the shape of an elephant. Also known as the Chang Building, the Elephant Tower uses three towers to create a cubist abstract elephant design.

The 170-metre-long building features giant round windows that depict the elephant’s eyes, balconies that help form the ears, and rows of golden-coloured office units that are meant to be the tusks. In addition to the offices, the building houses a shopping mall and luxury condos. 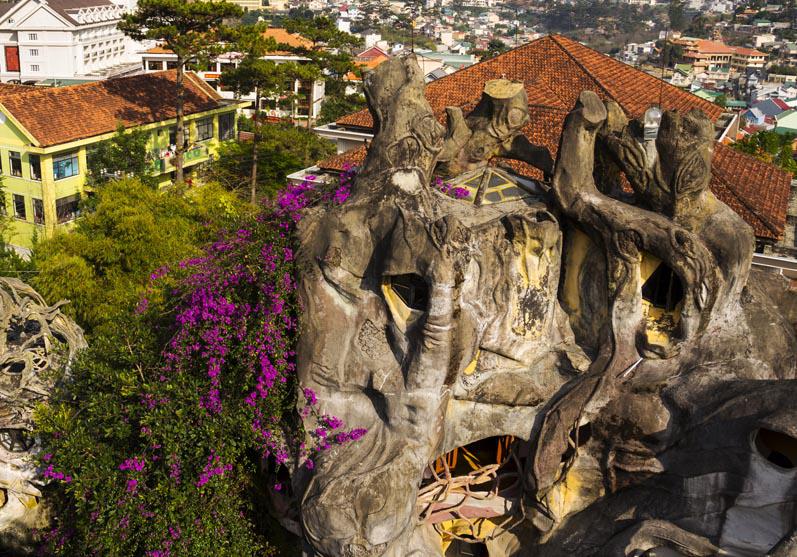 Looking like something you’d expect to see in Disneyland, Vietnam’s Hằng Nga Guesthouse, or Crazy House, is located in the city of Da Lat in the Central Highlands.

The shape of the guesthouse is meant to look like a giant leafless banyan tree that towers some five storeys overhead. Architect Dang Viet Nga’s vision for the building looks as though it was inspired by a combination of the works of the architect Antoni Gaudí and the artist Salvador Dalí.

The guesthouse is open during the day for public visits and you are even welcome to book one of the ten themed guest rooms for the night.

Each room portrays a different animal such as the tiger room and the kangaroo room, the latter of which features a kangaroo sculpture with a fireplace mounted within its belly. 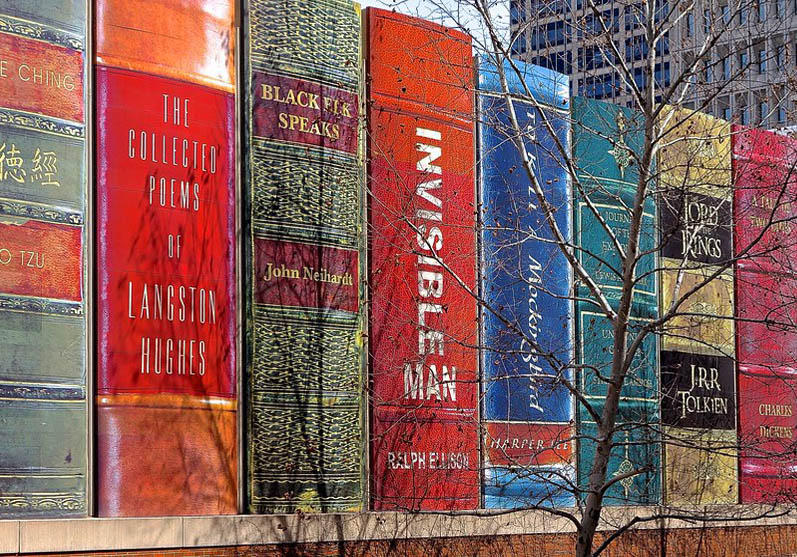 The last building you would think would be bold enough to portray a bizarre design is a library, but that is exactly what Missouri’s Kansas City Library did.

Instead of just offering books inside, you’ll find giant 25-foot-tall books gracing the side of the library’s exterior.

The books are made to look as though they are stacked on a shelf where just their spines are showing and this giant faux book wall helps to disguise the parking garage that lay hidden behind it.

The wall of books features nearly two dozen titles, each of which has a spine measuring almost three metres in width. The books feature popular book titles like The Lord of the Rings, A Tale of Two Cities, and To Kill a Mockingbird.

The giant book wall has led to the library’s parking garage being nicknamed the Community Bookshelf. 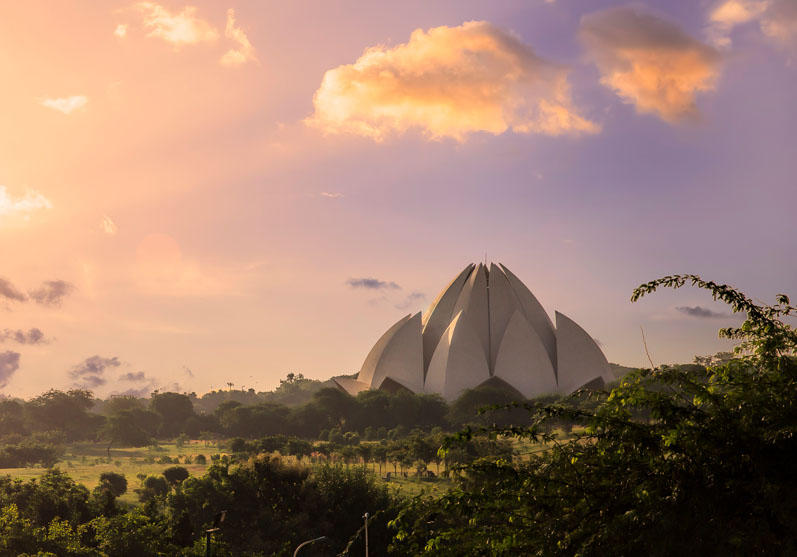 A visit to New Delhi offers the chance to witness the majestic Lotus Temple.

This Bahá’í House of Worship was designed to look like a lotus flower, but it also strongly resembles Australia’s Sydney Opera House with its offering of giant white sails.

The temple is constructed from white marble sourced from Greece and portrays 27 sail-like petals. Like other Bahá’í Houses of Worship, the Lotus Temple is open to all people regardless of their sex, ethnicity, or religious beliefs.

Visitors are encouraged to visit the temple to pray or meditate and this has led to the building becoming one of the world’s most visited buildings. The temple is probably more beautiful than weird and its beauty is only further enhanced by the landscaped gardens and nine pools of water that surround it.