Let us introduce you to this fascinating country as we take you on a journey through Vietnam from north to south, highlighting the country’s most beautiful regions and their many natural and cultural wonders.

There’s no denying that Australians are drawn to Southeast Asia. The region offers exceptional holidays at affordable prices, catering to both backpackers on a budget and those wanting to indulge in 5-star comforts at 3-star prices.

Vietnam is increasingly pulling our attention away from our favourite go-to destinations like Bali and Thailand, offering up charming rural villages, a stunning coastline, unforgettable river journeys, giant caves, and delicious cuisine.

A country that endured war for much of the second half of the 20th century, Vietnam is now experiencing rapid modernisation and becoming one of the world’s top travel destinations.

Offering one of the Southeast Asia’s oldest cultures, Vietnam continues to grow while at the same time holding onto its ancient culture and traditions. Whether you’re thinking about taking a river cruise or land based journey through Vietnam, you’ll find there are comprehensive travel insurance policies for Vietnam available to suit your needs. 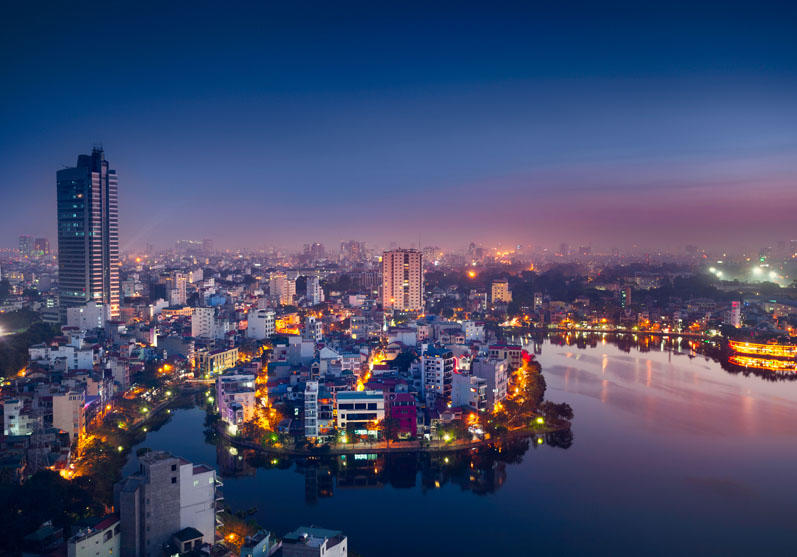 Vietnam’s capital, Hanoi has seen a rapid modernisation in recent years. Despite its recent addition of towering skyscrapers, the city offers more cultural sites than any other city.

Explore the National Museum of History with its thousands of well-displayed artefacts before taking to the streets to see ancient temples and the city’s many French influences from its period of French colonisation. Hanoi’s French feel with its French colonial architecture in many areas has led to the city being referred to by many as the “Paris of the East”.

Enjoy the city’s many lakes, shop the markets, be introduced to the world of water puppet theatre, catch a performance at the opera house, and browse the National Museum of Fine Art.

Further afield you have the wildlife and hot springs of Ba Vi National Park and magical Ha Long Bay. One of Vietnam’s most visited regions, Ha Long Bay tours readily depart from Hanoi and can be booked through most Hanoi hotels and tour agencies.

Be dazzled by countless limestone karsts and islands as you cruise on modern luxury ships or more traditional junk boats. Both day and overnight tours are available to experience this naturally beautiful albeit touristy region of Vietnam. 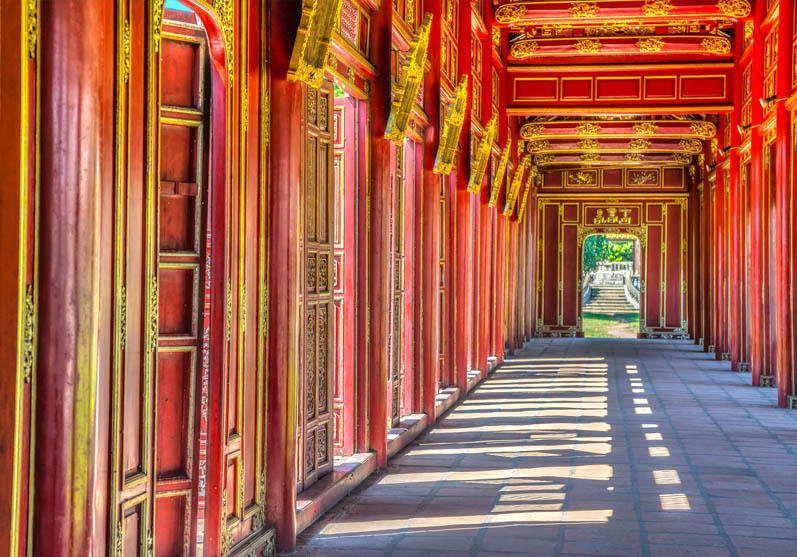 The site of one of the Vietnam War’s bloodiest battles, Huế was once the imperial capital of Vietnam.

The city is home to the grand Imperial citadel with its tombs, gardens, and pagodas. A visit to the citadel will allow you a glimpse into the Nguyen Dynasty and you’ll discover many of the country’s most important monuments here.

Every two years, the city hosts the Huế Festival which showcases the cultural and historical values of the former capital. Luckily for visitors, the festival is scheduled to be held in 2020 from 04/1-04/6.

You can expect a wide range of displays, exhibitions, performances, and more. The city is also known for its Vietnamese cooking schools where you can learn the art of making local favourites such as Vietnamese pancakes and pho.

After getting your fill of the Imperial City and local food, relax a bit by taking a cruise along the Perfume River where you’ll encounter even more attractions. 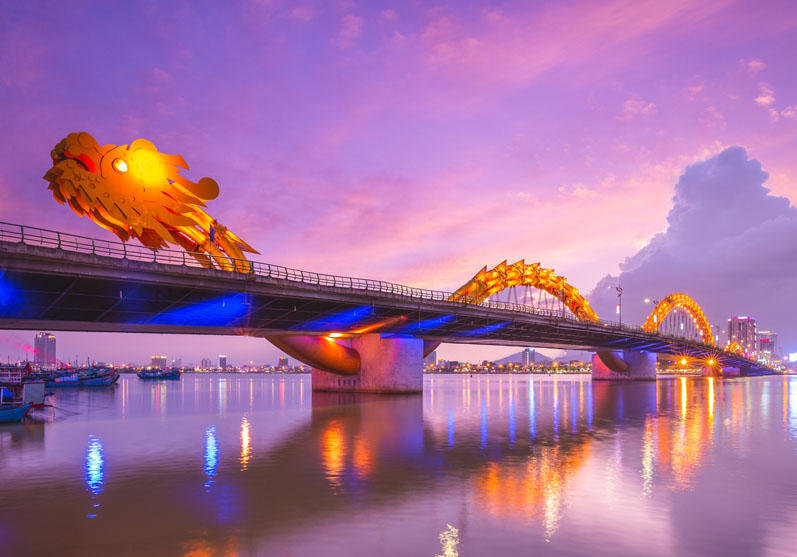 Situated roughly at the halfway point along our journey of Vietnam from north to south lies Da Nang.

The city is known for its many beautiful beaches including My Khe Beach, Lang Co Beach, and Non Nuoc Beach.

The calm cool waters are a popular playground for all kinds of outdoor recreation and relaxation, with great underwater diving adventures available to those who visit nearby Cham Island.

Trek up Sơn Trà Mountain for the chance to see several species of primates including the red-shanked douc and rhesus macaque. The presence of monkeys has led to the mountain being commonly known as Monkey Mountain.

Another natural wonder to explore is the Marble Mountains. These five marble and limestone hills are home to centuries-old temples and offer stunning elevated views over the coastline.

Back in the city, don’t miss the crazy dragon-shaped bridge that spans the Han River. The dragon of the aptly named Dragon Bridge breathes fires and sprays water on the weekends. Along the Han waterfront you’ll find a number of modern restaurants and hotels. 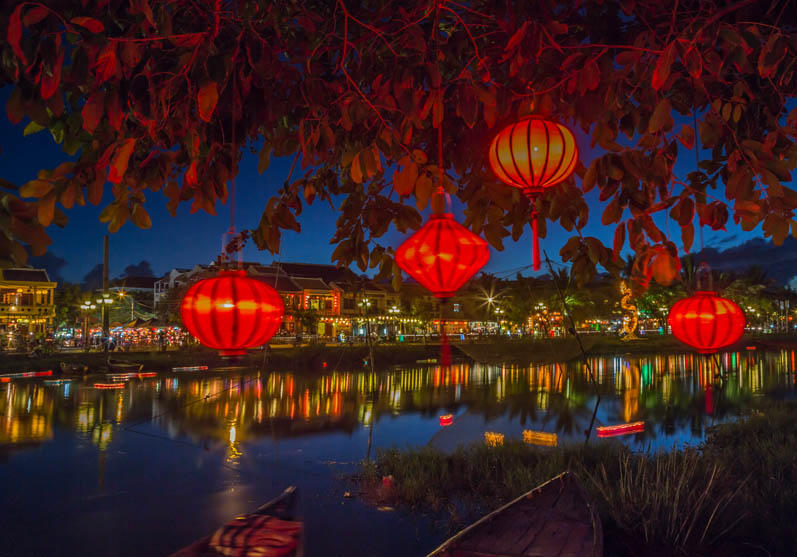 Just a short distance from Da Nang we find Hội An whose Old Town has been recognised as a UNESCO World Heritage Site.

Hội An was an important Southeast Asian trading port that continues to attract shoppers looking to find beautiful garments. Commonly known as the “City of Tailors”, you’ll encounter countless tailors eager to custom-design you a new suit or dress.

The history of the city comes alive with a simple walk through the Old Town where you’ll witness the Japanese Covered Bridge, and the riverfront offers an abundance of nightlife and restaurants serving up fresh seafood delivered right off the boats.

Visit the bustling local fish market to see the seafood being brought in or arrange a fishing adventure of your own. Boat and kayak tours readily depart on the Thu Bon River.

If you time your visit just right, you can catch one of the monthly Full Moon Lantern Festivals. Those wanting to simply relax can head to An Bang Beach or Cua Dai Beach. 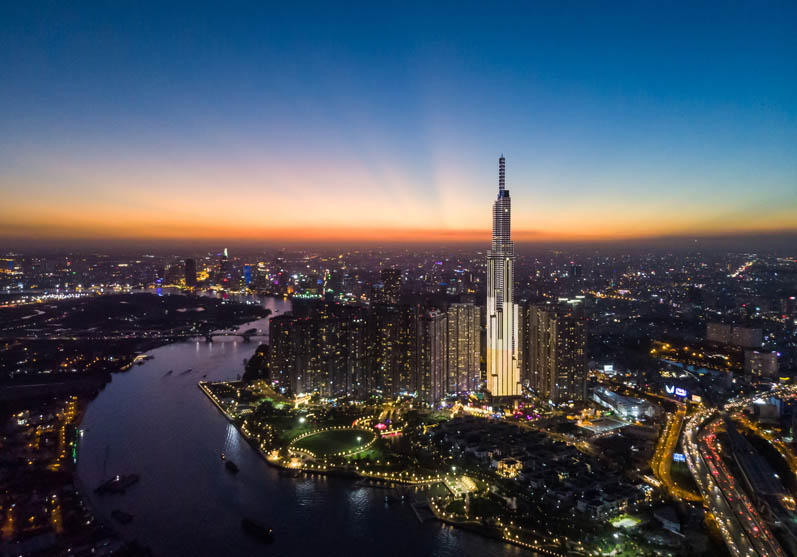 Once known as Saigon, Ho Chi Minh City is Vietnam’s most populous city by a long shot.

This cosmopolitan financial centre is chaotic yet beautiful, perfect for travellers never wanting to be bored. The city is home to the country’s tallest building, Landmark 81, where you can really take in the city in its entirety by heading up to the skydeck.

Visit Reunification Palace, the former residence of South Vietnam’s president and where the Vietnam War came to an end.

There are countless museums where you can fully appreciate the history of both the city and country including the Ho Chi Minh City Museum, Museum of Vietnamese History, and War Remnants Museum.

One of the most popular day tours to take is to the Cu Chi Tunnels where you’ll get to experience what life was like for Vietnamese soldiers who had to endure the claustrophobic conditions of the extensive underground tunnel network found here.

Don’t miss the colourful Jade Emperor Pagoda or the Saigon Zoo and Botanical Garden and witness more signs of French colonialism in Vietnam as seen by buildings like Ho Chi Minh’s Notre-Dame Cathedral.