Top 5 UNESCO sites around the world

UNESCO, short for the United Nations Educational, Scientific and Cultural Organization, recognise places around the world that have outstanding cultural or natural importance.

Established in the 1970s, UNESCO has accrued over 1,120 World Heritage Sites to date with many more tentative sites around the world that are likely to achieve World Heritage status in the near future.

While Australia is lucky enough to have 20 UNESCO sites including the Sydney Opera House, Great Barrier Reef, and Kakadu, we thought we would introduce to you the Top 5 UNESCO sites from around the world.

While UNESCO does its part to protect the world’s most iconic landmarks and natural wonders, make sure you do your part to protect you and your family financially with travel insurance while travelling to see these incredible places for yourselves. 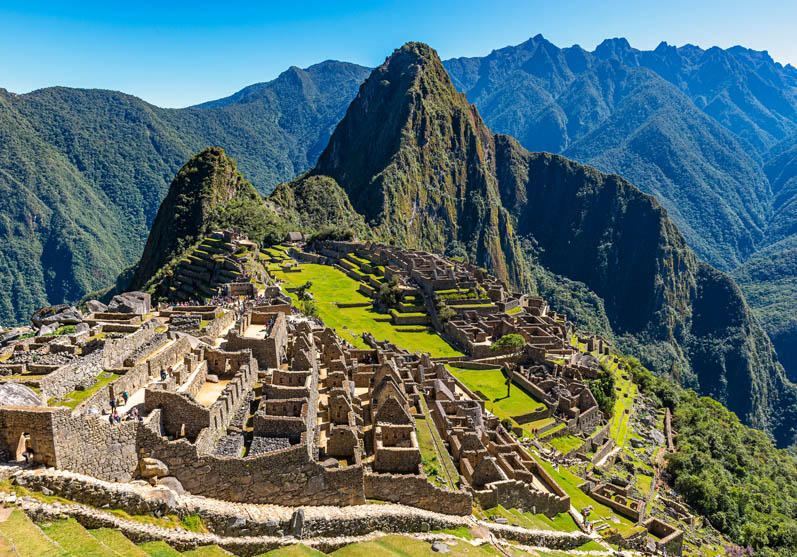 Machu Picchu is Peru’s 15th-century Inca citadel that was abandoned sometime around the Spanish conquest of South America.

Hidden in the rainforest for centuries, the site was only brought to the world’s attention after it was rediscovered by American explorer Hiram Bingham. A luxury train that takes passengers to Machu Picchu now bears the explorer’s name.

The journey takes roughly four hours to reach the village of Aguas Calientes at the base of the citadel from the city of Cusco.

Restoration work continues on the site and restrictions on tourist numbers have also been implemented to protect what has become one of the New Seven Wonders of the World.

Some of the stones used to build Machu Picchu are thought to weigh as much as 50 tons, all of which were hand chiselled from the nearby mountains and somehow hauled to their final resting place.

In addition to the many interesting buildings you can visit, the site contains sacrificial altars and terraces which were used for farming. You’ll even meet a few llamas on the mountain. At the base of the mountain in Aguas Calientes, there are plenty of hotels and restaurants available as well as soothing hot springs for which the village is named for. 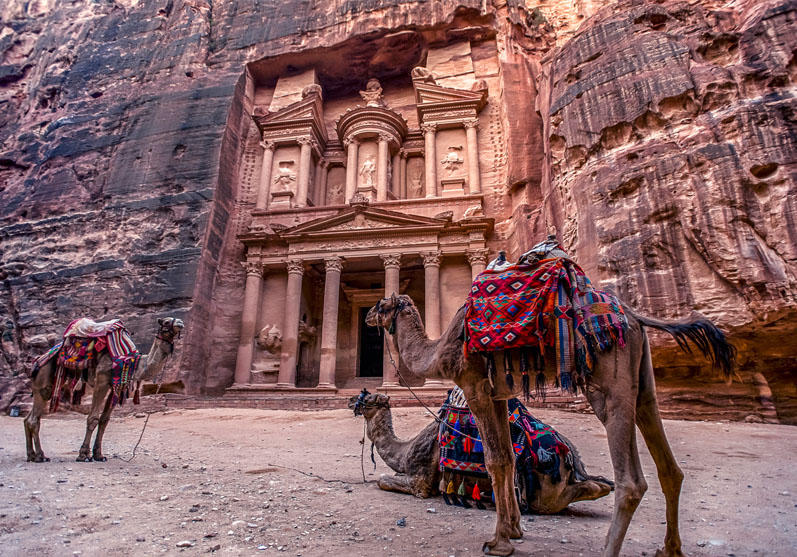 By far Jordan’s most impressive and most visited site, Petra is an ancient city belonging to the historical Nabataean Kingdom.

Its original inhabitants called it Raqmu and many today call it the Rose City, due to the colour of the area’s sandstone.

The ancient city is thought to have been settled as early as 9,000 BC and later became the capital of the Nabataean Kingdom and a major trading hub.

Petra is reached by making your way through the roughly kilometre-long narrow gorge known as the Siq which is as narrow as 3 metres in some spots. While Petra is home to hundreds of carved tombs and monuments, it is Al-Khazneh which is most impressive. Also known as The Treasury, Al-Khazneh is an elaborate temple carved into a sandstone rock face that was built as a mausoleum for Nabatean King Aretas IV.

Like Machu Picchu, Petra was named one of the New Seven Wonders Of The World. 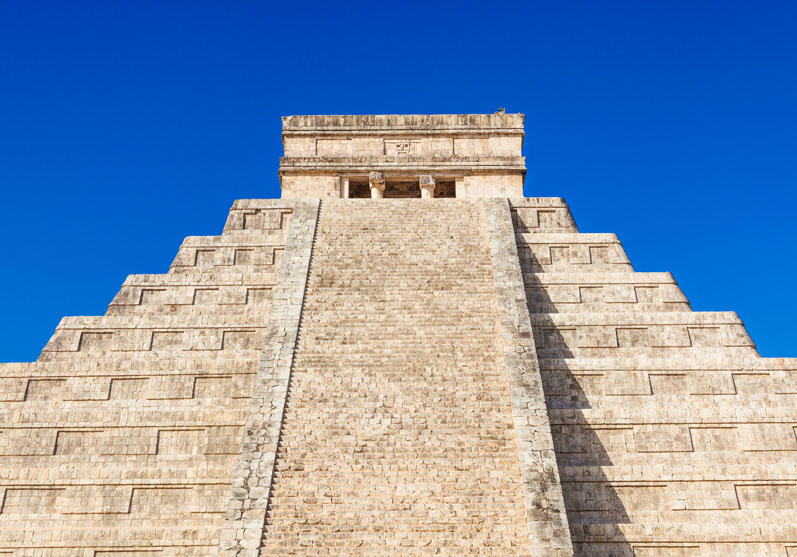 This pre-Columbian Maya city is one of the country’s most notable archaeological sites, home to the famous pyramid known as the Temple of Kukulcan.

Sometimes referred to as El Castillo, the pyramid was built between the 8th and 12th centuries and stands some 30 metres tall if you include its temple.

Many of the site’s main attractions including the pyramid, Great Ball Court, and the Temple of the Jaguars can be found at the Great North Platform complex.

Visit during the spring or autumn equinoxes to see the illusion of serpents slithering down the pyramid created by the shadows from the sun.

The site is surrounded by jungle that’s filled with colourful birds and butterflies. Nearby, you can visit the Ik-Kil cenote for an adventurous swim. A stairway leads roughly 25 metres below the ground to the natural underground reservoir where you’ll find a swimming platform that provides access to the 60-metre-wide swimming hole.

Most travellers wanting to explore Chichen Itza and other important Mexican archaeological sites such as Tulum and Coba base themselves in Cancun as the resort city offers car rentals for easy self-drive tours as well as plenty of guided tours to the various sites. 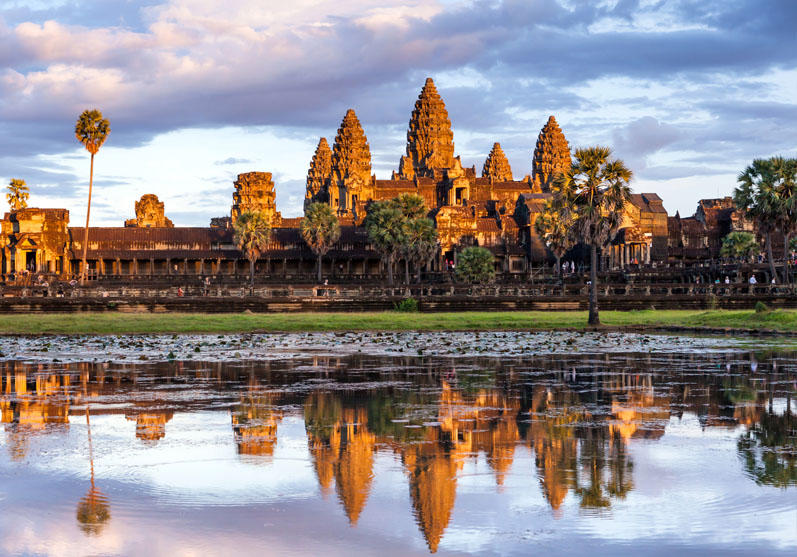 A place that is bound to make you feel a bit like Indiana Jones, Angkor Wat is considered to be the world’s largest religious monument and is the sole reason over 50% of international tourists visit Cambodia each year.

Known as the “City of Temples”, Angkor Wat covers an impressive 400 acres and new ruins are being discovered every year. The construction of the complex began in the early 12th century by the Khmers.

Although it began as a Hindu temple, it later became a Buddhist temple. Today, visitors can walk among the excavated temples and intricate rock carvings that have been partially consumed by a mix of lush jungle and crazy looking tree roots.

The site is so important to Cambodia that you find it proudly displayed on the nation’s flag. 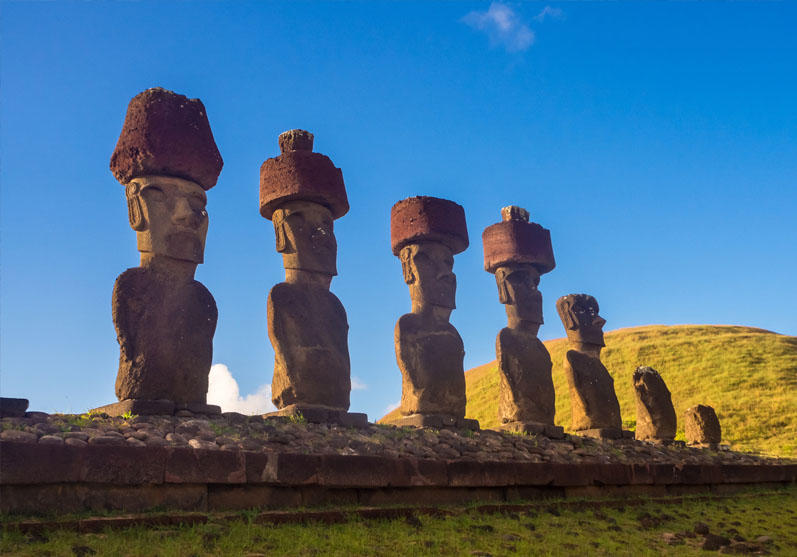 One of the world’s most remote UNESCO sites, Easter Island belongs to Chile despite it being situated in the Pacific Ocean over 3,000 kilometres away from the Chilean coastline.

Known locally as Rapa Nui, the island is thought to have been settled by Polynesians around the 13th century. Depletion of the islands resources, introduced European diseases, and slave trading would all force the civilization to crumble.

Today, visitors make their way to this beautiful island to see the many large carved stone statues known as moai. Some of these giant statues stand ten metres tall and weigh in at over 80 tonnes.

The island’s largest ahu or stone platform of moai is Ahu Tongariki. The moai statues found here were toppled and later swept inland by a tsunami during their lifetime but have since been reerected to stand tall once again.

Other notable sites on the island include the Rano Kau crater where the ancient annual Bird Man ritual was held nearby, and the Rano Raraku volcanic crater which was the quarry from which most of the island’s moai were carved from.