Southeast Asian cuisine: What to eat and where

Southeast Asian cuisine is colourful, flavourful, and as diverse as the many cultures found in the region.

Whether you’re an insatiable carnivore, vegetarian, or vegan, you can be assured to find a wide range of meals throughout Southeast Asia that suit your tastes.

Let us take a look at some of the national dishes and specialties found in the Southeast Asian countries most frequently visited by Aussie travellers.

Whether you’re planning a holiday in Bangkok or Ho Chi Minh City, be sure to purchase travel insurance in case you happen to pick up a nasty foodborne illness. 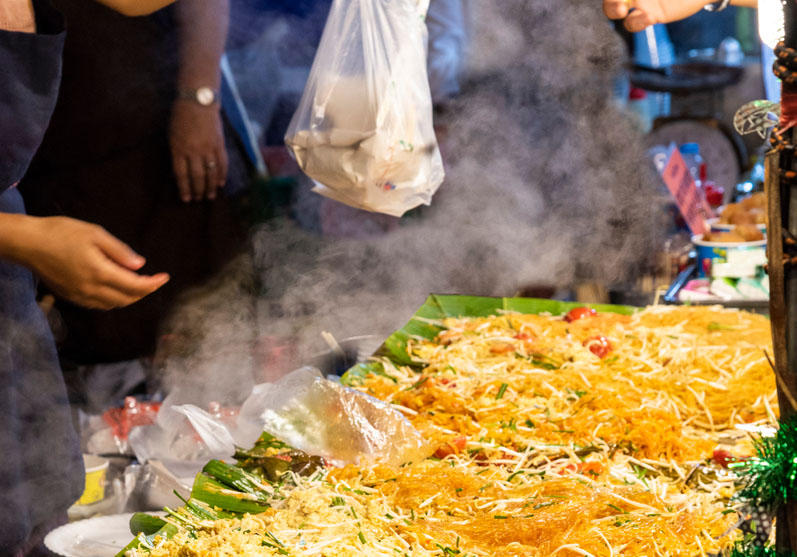 This stir-fried rice noodle dish often contains prawns or chicken, mixed in a sweet and sour Pad Thai sauce. Crushed peanuts are at times added to this dish, something to be mindful of if you are allergic. Other ingredients 05/include onions, sprouts, egg, garlic, and lime juice all mixed together in a wok.

You will find Pad Thai served in most restaurants around the country, as well as from street vendors.

A creamy version contains coconut cream, much like Tom Kha Kai, or chicken in coconut soup. You’ll often see it being served in a large clay bowl with charcoal burner.

Laap is a minced meat salad that is also popular in Thailand, as well as being an unofficial national dish of Laos. It features a mince made from either chicken, beef, duck, pork, or fish alongside various herbs, lime juice, and fish sauce.

It is often served with sticky rice or fresh vegetables. Last but not least we have Ho Mok Talay, or seafood curry, steam-cooked in banana leaves.

Once again we have a dish that features coconut cream alongside fish, curry spices, and vegetables. This dish is definitely not for those that prefer a mild flavour. 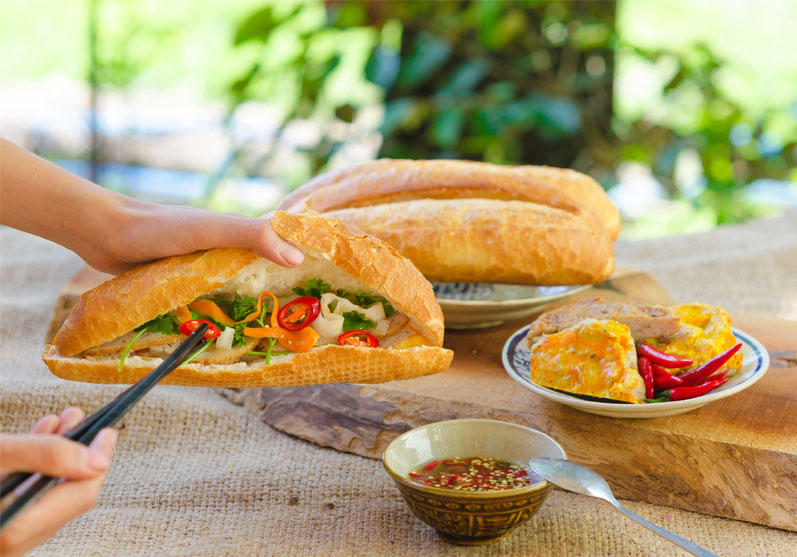 Originating in the northern region of the country, Vietnam’s signature dish has to be Pho.

It has attracted worldwide attention ever since the end of the Vietnam War, where it was shared by refugees that had been displaced around the globe. Pho is a soup made of broth, rice noodles, herbs, and usually beef slices or meatballs.

More exotic variations replace the traditional cuts of beef with beef tendon or pig stomach. The use of basil, mint, cilantro, and lime gives the dish abundant flavour.

A perfect snack, spring rolls known as Goi Cuon are packed with vermicelli noodles, pork, prawns, shrimp, and lettuce. The rolls are often accompanied by a hoisin-based dipping sauce mixed with crushed peanuts.

Lastly, in South Vietnam, seek out Ca Kho To, catfish fillets caramelised in a thick gravy of soy, sugar, and fish sauce. The dish presents an intense sweet and salty flavour. 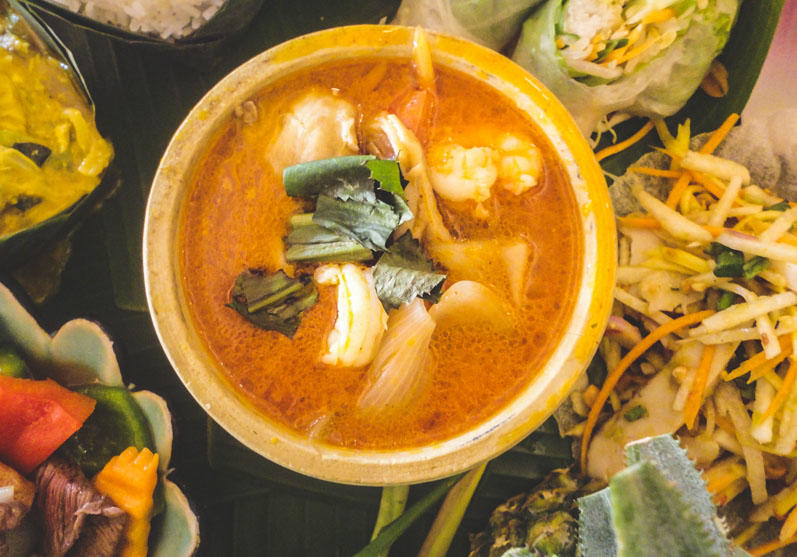 While you 05/not be adventurous enough to try some of Cambodia’s truly exotic delicacies like grilled frog, tarantula, or the fertilised embryo of a duck called balut, there are thankfully a number of other more aesthetically pleasing foods to try.

Often regarded as the country’s national dish, Fish Amok is a thick soup made with fresh fish drowning in bath of coconut milk and curry paste. The soup is often served in banana leaf bowls alongside steamed rice. The dish is similar to Thailand’s Ho Mok Talay.

For a lighter and more refreshing dish, try ordering a chicken and banana flower salad. This citrusy salad features sliced chicken breast on a bed of crunchy banana blossoms.

Also in the mix, you’ll find fried shallots, garlic, and fresh squeezed lime. Aussies love their snags, and when in Cambodia you can try a Cambodia sausage known as Twa ko. The sausages are usually made from beef or pork with a generous fat content.

If visiting the coastal town of Kep, keep an eye out for Kampot pepper crabs. Freshly caught crab is served with green, berry-looking peppers that give the dish a generous spicy kick. You can also find the dish in Phnom Penh and Siem Reap, but the freshest crab is found along the coast. 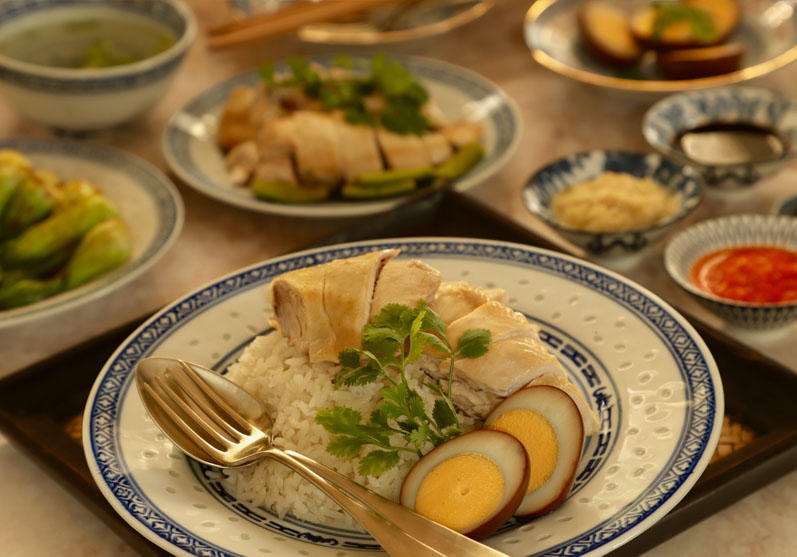 Singaporean cuisine has been influenced by many cultures throughout Asia, as well as the Western world.

Dishes are as diverse as the country’s people and you’ll notice Indian, Chinese, and Malaysian flavours just to name a few.

Chili Crab is one of the country’s most notable dishes and versions include fresh crab being served in a spicy sambal sauce or with a black pepper sauce. The steamed hard-shell crabs are cracked and then filled with the spicy sauce.

Chinese and Malaysian flavours combine to create Laksa. This spicy noodle soup often uses wheat noodles or rice vermicelli and chicken or prawns are usually thrown in. There are many varieties of Laksa to try, some being more water-based, while others feature a rich creamy coconut milk. The soup is sometimes served with cockles or tofu puffs.

Another local favourite is Hainanese Chicken. Steamed chicken is presented over a bed of fragrant rice and sometimes with a garlic chilli sauce. The rice is cooked in a mix of chicken broth, ginger, and pandan leaves. 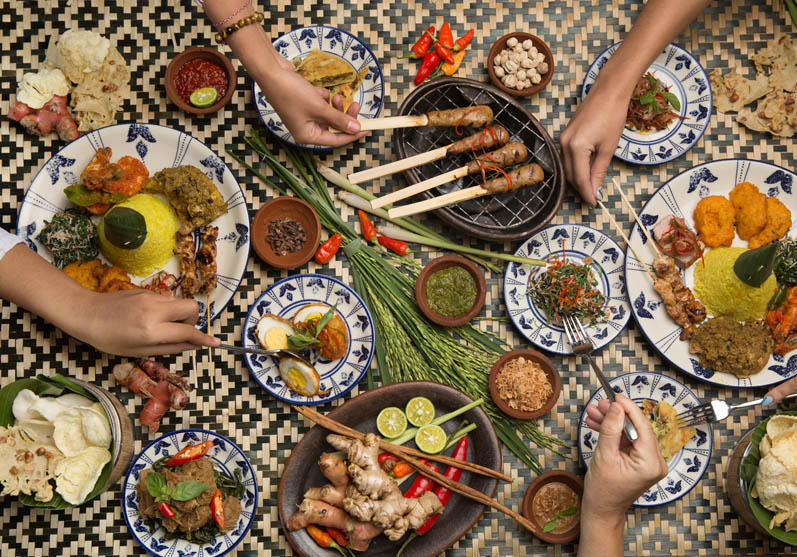 Comprised of thousands of islands and having been influenced by a number of countries such as China, Spain, England, and the Netherlands, it’s no surprise that the cuisine of Indonesia is highly varied and changes wherever you travel in the country.

Each island and region has its own specialties, but one thing most places share is the fact that dishes commonly feature rice.

One such dish is Nasi Goreng, the nation’s national dish. This stir-fried rice dish 05/be simple but it’s always delicious and its recipe is seemingly a bit different in every kitchen you visit. The rice is smothered in a sweet soy sauce known as kecap manis along with chicken, prawns, pork, or beef for additional flavour.

Indonesian meatballs known as Bakso are crafted from beef and tapioca. Served widely around the country, especially as a popular street food, Bakso is usually served atop rice or egg noodles. The meatballs 05/also be accompanied with boiled eggs, tofu, chilli, and onions. So delicious is this Indonesian dish, that US President Obama declared it one of his favourites.

Beef Rendang is another favourite dish which originated in Sumatra. Beef is slow cooked and braised in coconut milk, usually served alongside rice. Some say it tastes like a beef curry without the broth. It offers just as much spice and packs an abundance of flavour.

However, you’ll have to wait a bit for this dish, as it takes hours for the beef to slow cook and become ultra tender. You’ll also find many dishes in Indonesia feature a sambal sauce, a spicy chilli-based condiment that often includes a range of spices, fruits, or vegetables.