Australia seems to be divided when it comes to Labour Day.

While Victoria and Western Australia choose to recognise Labour Day during March, Queensland opts for May. For those living in New South Wales, South Australia, and the ACT, Labour Day is fast approaching since they’ll be celebrating the long weekend from Saturday October 5 to Monday October 7 this year.

If you’re looking for a great escape close to home this Labour Day weekend, head south to Tasmania where the beautiful spring weather is just starting to take hold. Whether you’ve always wanted to see a Tasmanian devil or wish to check out Australia’s best preserved convict site, Hobart makes an exciting short-stay holiday.

We’ve crafted the perfect 3-day itinerary for exploring the beautiful city of Hobart and surrounds, breaking it down into what you should experience each day. Since local Tasmanians celebrate their Labour Day in March, which they refer to as Eight Hours Day, you can enjoy less public holiday crowds than you might find back at home.

As with any Australian based holiday, be sure to protect yourself with quality domestic travel insurance. 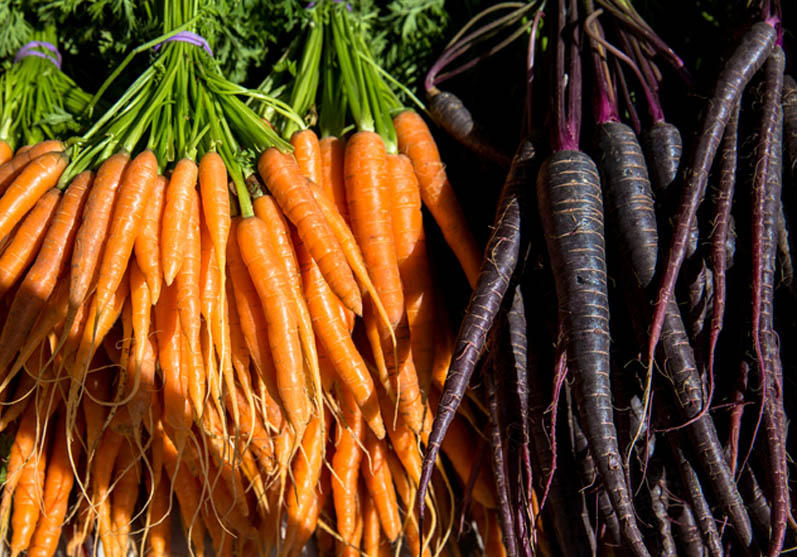 For well over 40 years, Hobart’s Salamanca Market has been one of Australia’s finest markets.

Held every Saturday from 8:30AM to 3 PM, it’s the perfect way to kick off your Tasmanian holiday. Situated along the city’s waterfront, Salamanca Market boasts hundreds of stalls where vendors offer up a wide variety of Tasmanian made goods.

Sample local grown produce and be amazed by the creativity of local Tasmanian artists. Best of all is the fact there is no entry fee, making it a great free and fun start to the morning. 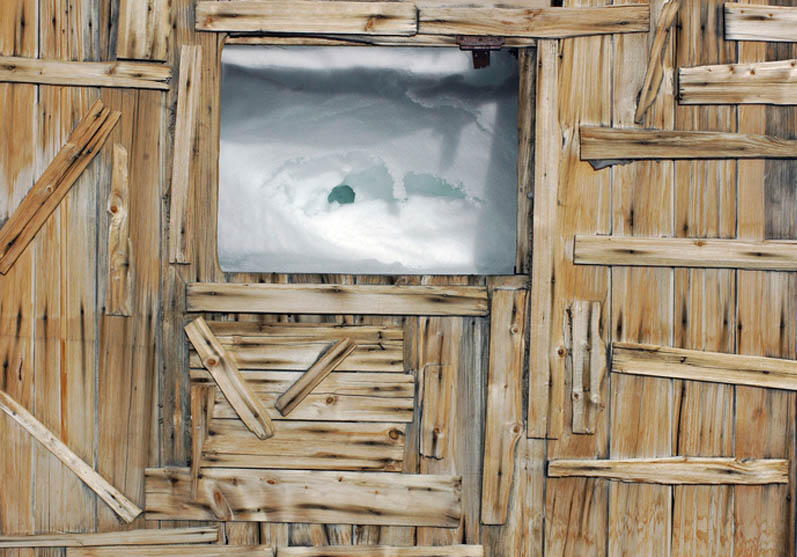 Just steps from the market is the Mawson’s Huts Replica Museum, which celebrates Australia’s most notable Polar explorer Douglas Mawson and his men who braved the Antarctic conditions during the early 20th century.

The museum’s design replicates the huts that Mawson and his crew lived in while they explored the icy continent. The museum displays many authentic artefacts from the expedition and proceeds go towards preserving the original huts which can still be found on Antarctica. 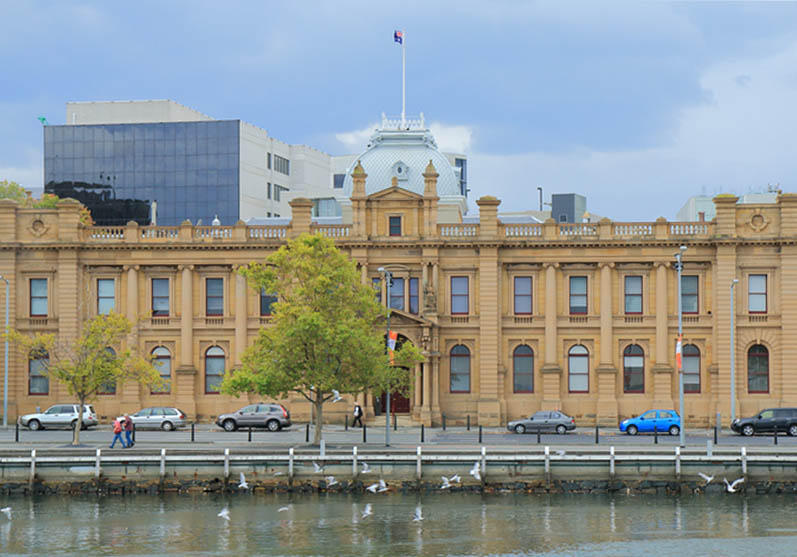 Not too far away from the Mawson’s Hut Museum is Australia’s second oldest museum.

Dating back to the mid 19th century, the Tasmania Museum and Art Gallery offers up a fascinating exhibit on the extinct Tasmanian tiger as well as displaying specimens of the island’s other fascinating creatures like Tasmanian devils, quolls, and platypuses.

The free museum also displays a wealth of Tasmanian colonial and contemporary art, mineral specimens found in the state, a large Antarctica exhibit, and many early artefacts relating to the state. 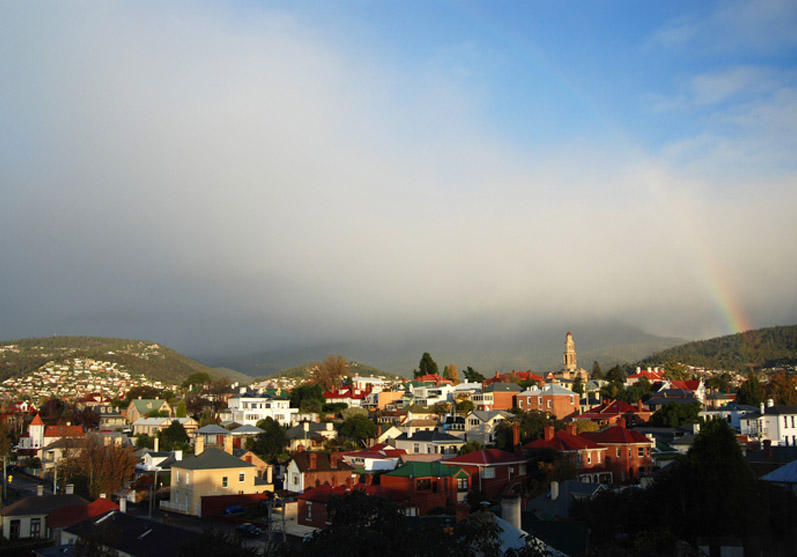 Head back towards the Salamanca Market to explore Battery Point in more detail.

Once a defensive outpost, the area now offers a wide variety of specialty boutique shops as well as numerous restaurants and cafes where you can grab some lunch.

Take some time to admire the old sandstone buildings and historic homes that date back to the 19th century. Rest your legs by relaxing in the Parliament House Gardens or Princes Park. 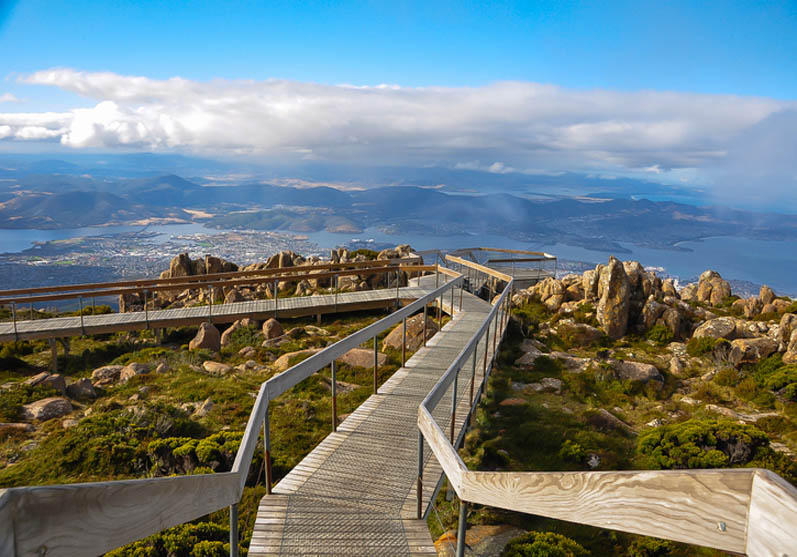 Get a bird’s eye view of Hobart by taking the 21-km drive to the summit of Mount Wellington.

You may also book an afternoon tour to see and learn the history of the mountain with the Hobart Shuttle Bus Company. On the way to the top, you will pass through temperate rainforest where several different hiking trails can be enjoyed.

Time your visit later in the day to catch the sunset as you seek out Bruny Island and the Tasman peninsula in the distance. Dusk is also a good time to possibly see many of the mountain’s nocturnal animals which include potoroos, pademelons, bandicoots, and possums. 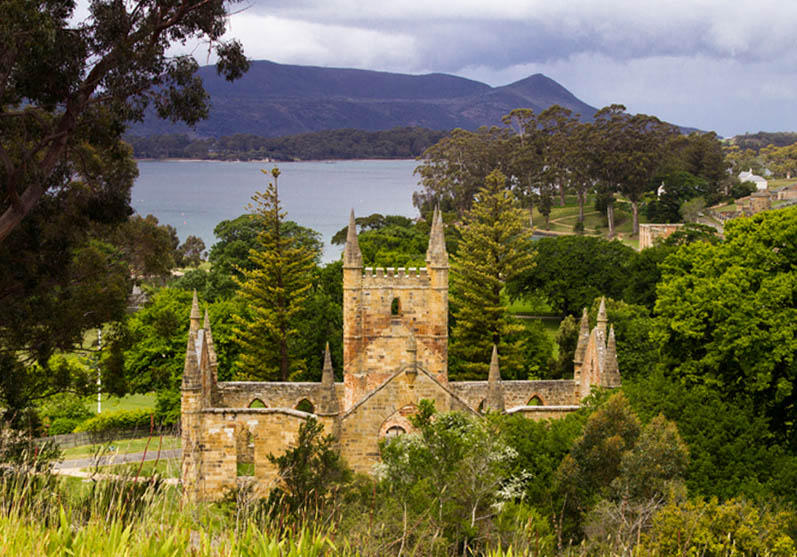 No trip to Hobart would be complete without taking a daytrip to see Port Arthur.

Just a 1.5 hour drive from the city, this open-air museum offers up a glimpse into one of Australia’s best preserved early penal settlements. UNESCO World Heritage-listed, the site is home to dozens of historic buildings that can be explored via self-guided or expert-led tours.

More intriguing tours include their ghost tours and cemetery tours on the Isle of the Dead. 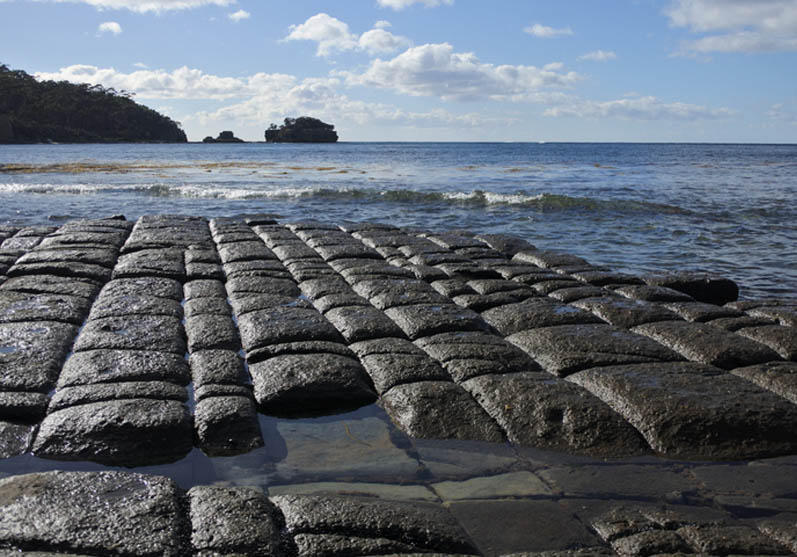 Port Arthur isn’t the only reason to make the drive out to the Tasman Peninsula, as there are numerous natural and historic landmarks along the way.

One such natural landmark is the Tessellated Pavement, which although looks manmade is actually a rare geological feature caused by the movement of the Earth’s crust.

A short walking trail exists just before you cross over the neck of Tasman Peninsula and allows you to walk out on the flat geological feature that juts out into Pirates Bay.

Such a rare geological feature is only found in a few places on Earth. 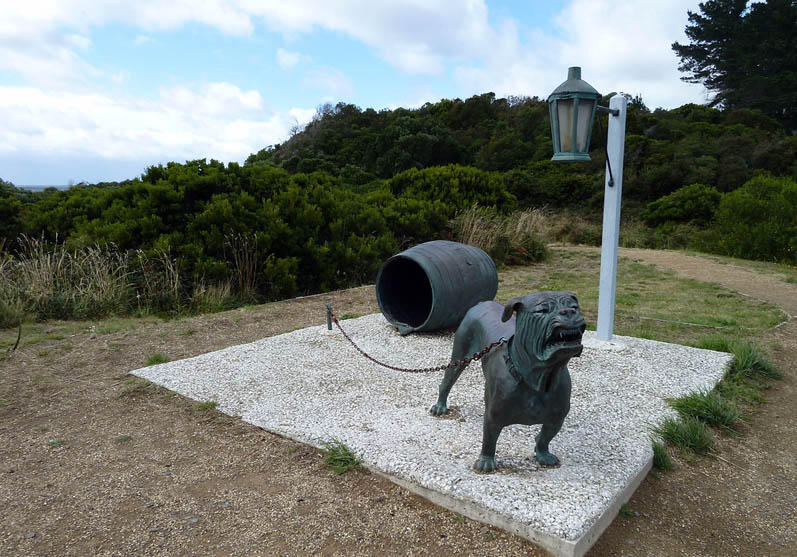 This narrow strip of land was at one time guarded by ferocious dogs that were put in place to deter early convicts from escaping Port Arthur and heading north. A sculpture of a dog chained to a barrel and an early oil lamp now rests in the spot known as the Dog Line.

The site is also home to Australia’s oldest wooden military building and a short stretch of beach allows you to stretch your legs a bit. 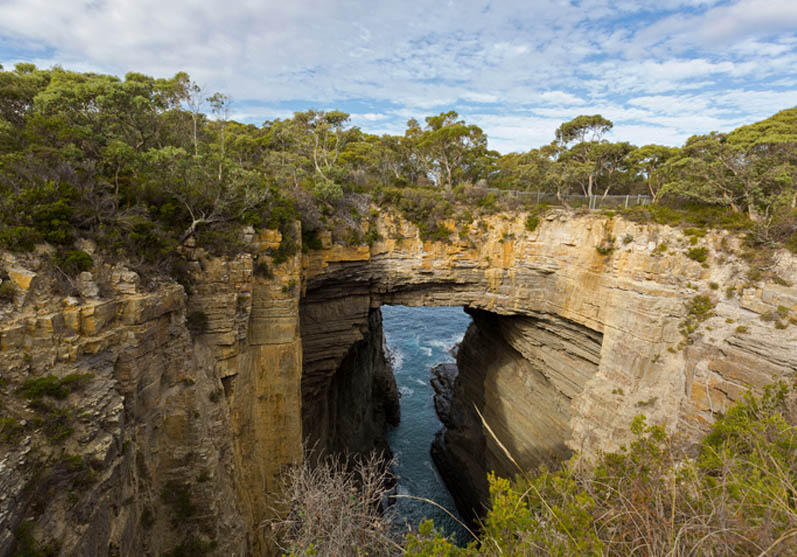 Several more impressive geological formations can be found at the southern end of Pirates Bay.

The Tasman arch offers up the chance to walk across a tall natural bridge that is set into the sea cliffs. Several bush trails can also be taken to explore more of the surrounding wilderness. 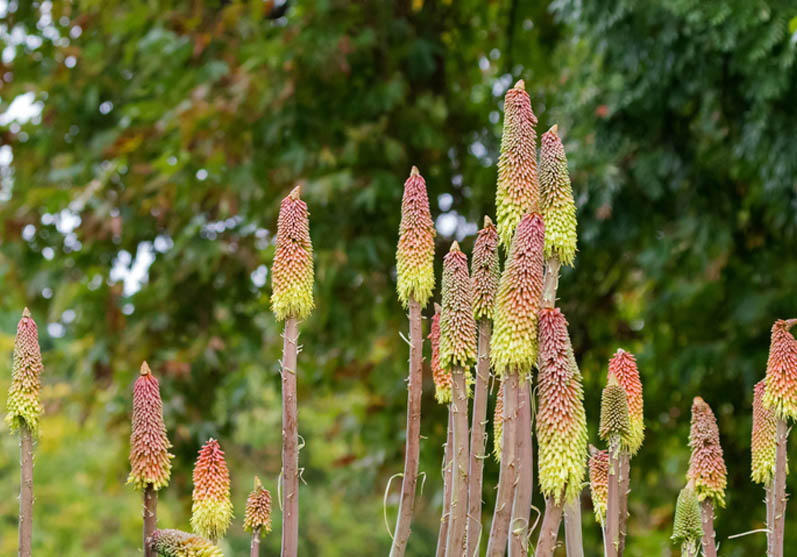 Start off your Monday with a lovely walk through the Royal Tasmanian Botanic Gardens.

Once home to the Tasmanian Muwinina people, the gardens now showcase extensive gardens that date back to the early 19th century.

Australia’s second oldest Botanical Gardens is situated along the River Derwent and features over 400 native Tasmanian plant species as well as exotic flora from around the world.

Make your way through the Japanese Garden, Herb Garden, Cactus House and the world’s only Subantarctic Plant House that features plants found on subantarctic islands such as Macquarie Island. 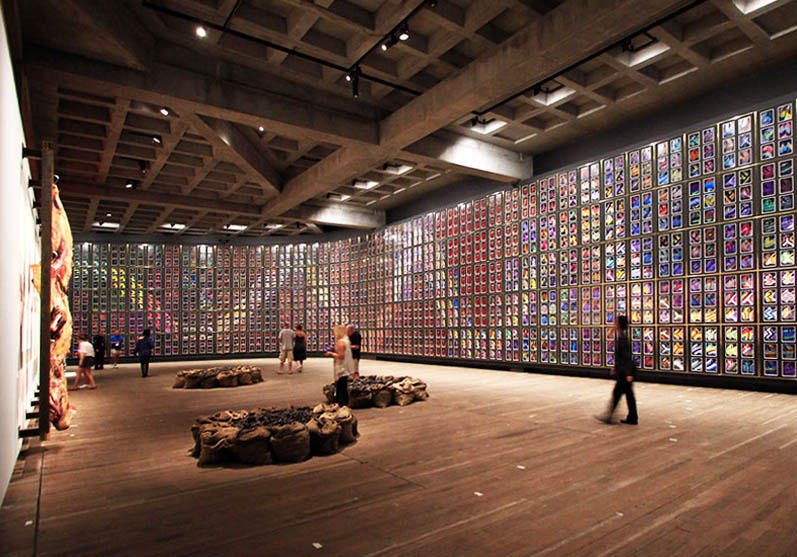 After walking around the gardens, head further north along the River Derwent to check out the eccentric and sometimes controversial exhibits of MONA.

Head deep underground in the three-storey labyrinth that has been cut into the sandstone cliffs. Discover a world of contemporary artwork that has been described as sexy, bizarre, and sometime grotesque. Many also choose to arrive at the museum by the exciting dedicated ferry that leaves from Hobart’s Brooke Street Pier. 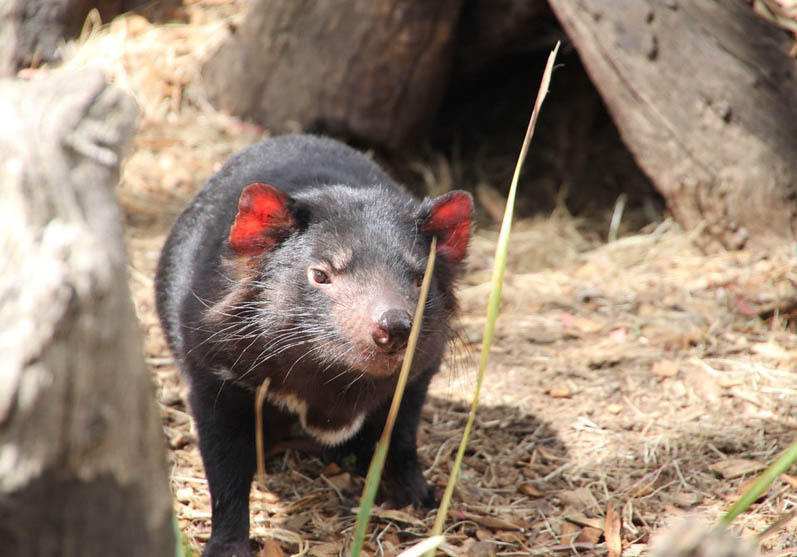 Cross over the River Derwent to the north and check out Bonorong Wildlife Sanctuary for guaranteed sightings of captive Tasmanian devils.

Seeing a nocturnal devil in the wild is quite rare around Hobart, but you’ll get up close views of these endangered carnivorous marsupials and watch them show their famous aggressive side during feeding times.

The sanctuary is also home to other Tasmanian marsupials including quolls, wombats, echidnas, and ring-tailed possums. You can also choose to hand-feed their free-roaming kangaroos. 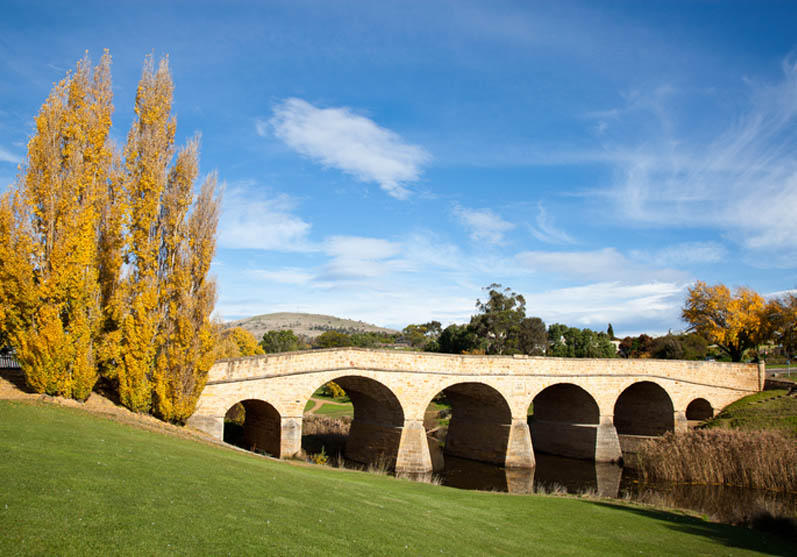 Before returning to Hobart, make a short detour to explore the nearby town of Richmond.

Here, you’ll get to cross Australia’s oldest bridge that is currently still in use. The town is also home to the oldest Roman Catholic Church found in Australia as well as the nation’s oldest intact gaol.

Enjoy a picnic along the Coal River after checking out more of the historic sandstone Georgian-style buildings. Many of these building have been restored and converted into small shops and cafes, allowing you to pick up some last-minute souvenirs and lunch before heading back to the city.