Walking the Camino De Santiago: A brief history and advice for travellers

The Camino de Santiago, or Way of Saint James, is one of the world’s greatest long distance pilgrimage routes.

Consisting of numerous routes, the Camino de Santiago means many different things to the different travellers that make the journey each year.

While it 05/have began as a religious pilgrimage, travellers walking the many routes today do so for various other reasons.

Wherever you decide to begin your journey along the Camino de Santiago, the journey ends in Santiago de Compostela in Galicia, Spain.

Let us take a look at the history of the Camino de Santiago and offer some advice for what you can expect if you’re thinking about making the journey.

If you are planning on completing the entire long distance journey or just want to experience a small segment of the Camino de Santiago, be sure to protect yourself with travel insurance since you can run into hiccups on all journeys whether they are large or small. 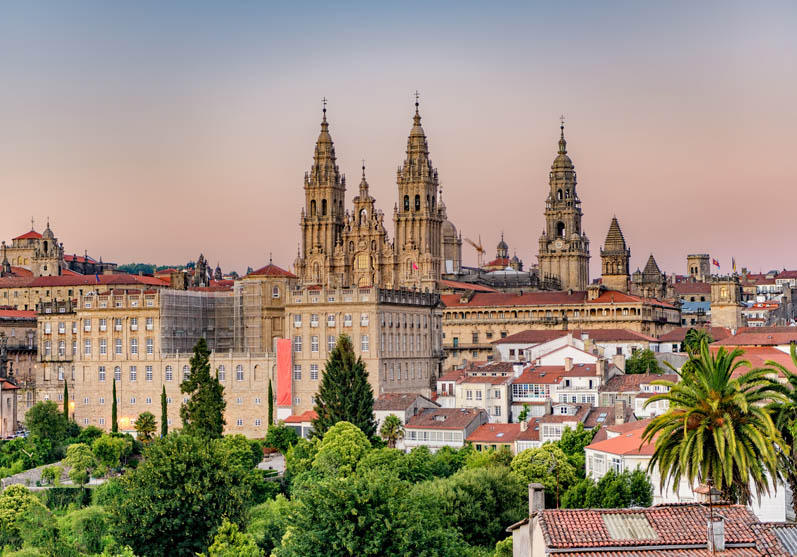 The Camino de Santiago’s roots date back to the Middle Ages when millions of European Christians made the journey to Santiago de Compostela as a way of potentially spending less time in purgatory for any sins they committed during their lifetimes.

We now have well marked routes in place for following the Camino de Santiago, but back in the Middle Ages this wasn’t the case.

People mainly set out on the journey from their own homes, meaning there weren’t official starting points like there are today. People began their pilgrimage from not only France, but also Portugal, England, and throughout Spain.

The walk honours Saint James, often referred to as Santiago in Spain. He is said to have been one of Jesus’ first disciples and one of the original 12 apostles and helped spread the word of Christianity throughout the Iberian Peninsula.

When Saint James died, his relics are said to have been buried in a cathedral which is now known as Santiago de Compostela in Galicia, Spain.

The pilgrimage to Santiago de Compostela grew in popularity until it saw hundreds of thousands of people making the journey to the cathedral every year.

Along with journeys to Jerusalem and Rome, it quickly became one of the most important Christian pilgrimages. 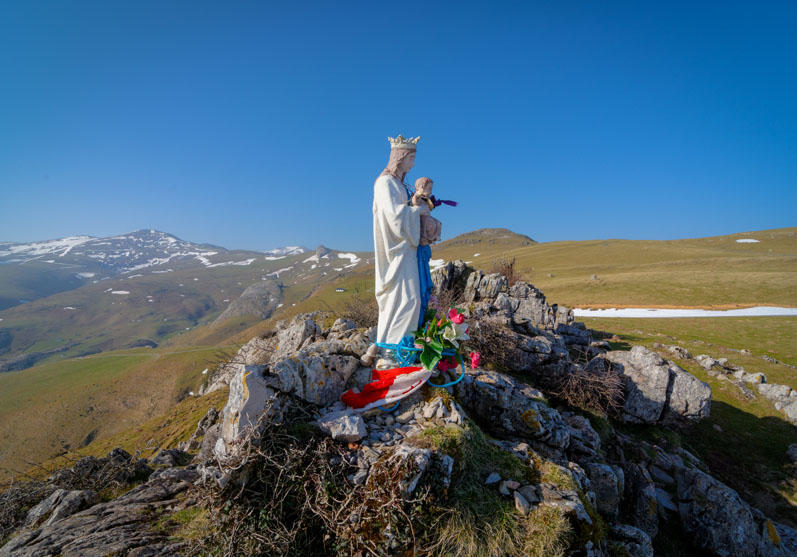 In the centuries following the Middle Ages, the pilgrimage to Santiago de Compostela began to lose popularity.

This was largely due to factors such as the Black Plague and rise of Protestantism.

The Camino de Santiago wouldn’t gain popularity again until the late 1900s when Father Elias Valiña began promoting the route and marking it with yellow arrows so as to make it easier for people to follow.

Although the original Camino de Santiago had numerous routes, the French Way started to become the main route most pilgrims would take.

Today, well over half of those undertaking the month long pilgrimage do so along the French Way. The French Way along with other routes are now recognised by UNESCO for their importance.

Promotion for the Camino de Santiago only became stronger, with a popular book being published by author Paulo Coelho’s called The Pilgrimage, as well as a major motion picture being made that details the journey.

While you 05/follow the same routes as pilgrims did centuries ago, many of the original dirt trails and roads have since been paved to produce wider and more modern roadways.

While most 05/walk the route, other modes of transport for making the pilgrimage include biking and even horseback riding. 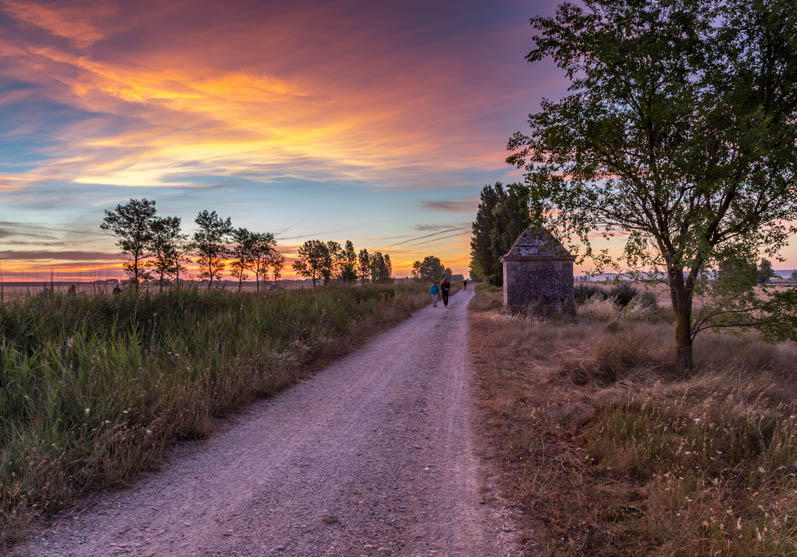 The Camino de Santiago 05/not consist of a single route, but there are a number of paths that have become more popular. The following are some of the most notable.

The French Way or Camino Francés is without a doubt the most popular. The route is nearly 800km long, running from Saint Jean Pied de Port in France to Santiago de Compostela in Galicia, Spain.

The route crosses the Pyrenees and cuts through cities like León and Pamplona. You can plan on the route taking around a month to complete on foot.

The Portuguese Way on the other hand is a shorter option with fewer hills to contend with. The route begins in Lisbon and follows major roadways for most of the journey.

The English Way is one of the shortest routes, taking just three or four days to complete the 75km journey that begins in La Coruña. Early English pilgrims would arrive in La Coruña by boat from England and then begin their journey.

They sometimes also chose to land in Ferrol, which offers a bit longer hiking option. 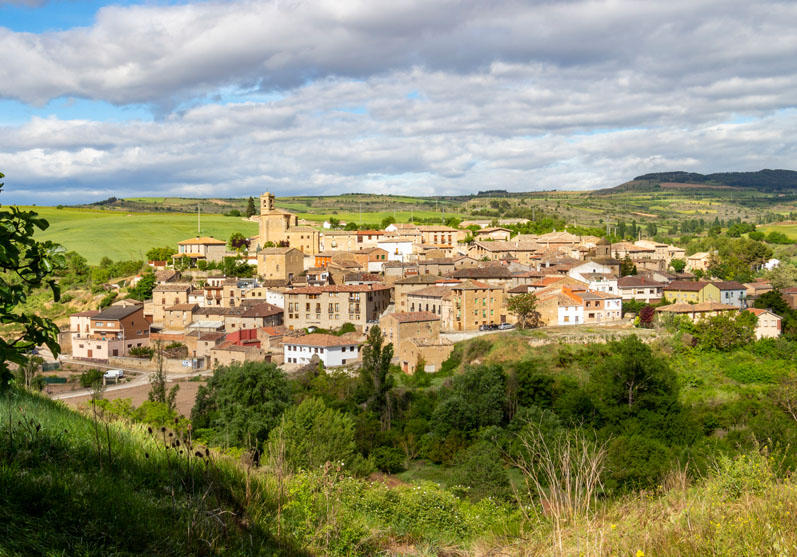 What you can expect along the Camino de Santiago

There is no one way to do the Camino de Santiago. As discussed, there are many routes that can be taken and there are a variety of different comfort levels you can choose from.

Many backpackers tend to stick to dorm-style budget albergue hostels and carry all their belongings for the duration of the journey.

Others choose to stay in fancy hotels or guesthouses and can opt to have their luggage brought to each new town along the way so as to not have to carry anything.

The best advice is to take the trail at your own pace. There are no rules of how quickly you must finish the pilgrimage. Some break up the route over several trips and it 05/therefore take them years to complete the journey and others choose to walk 30km a day and attempt to finish in record time. 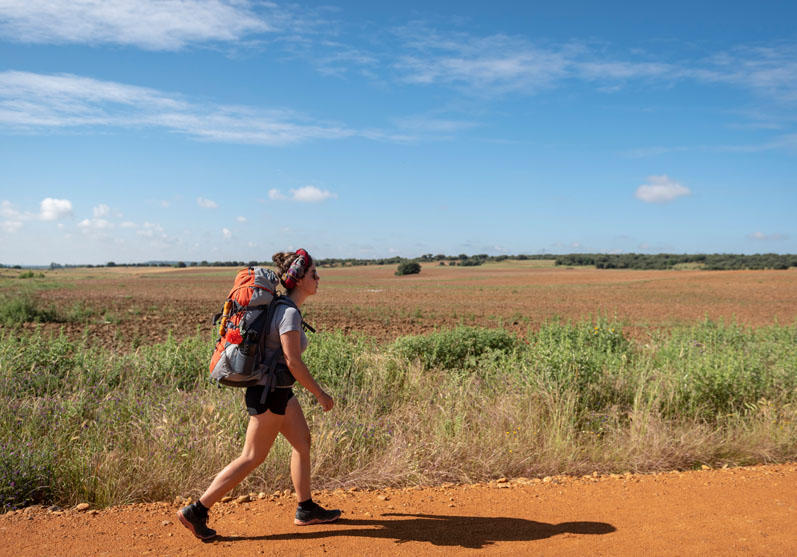 What to pack for the Camino de Santiago

You mainly want to have a sturdy and comfortable pair of shoes along with clothes that are appropriate for various kinds of weather.

Your day pack should be lightweight, consisting of only clothing, some snacks, and a water bottle.

Leave all the books and electronics at home, unless of course you are planning to have your main luggage transported for you to your various stops.

Unlike long-distance hiking trails through the wilderness, you don’t have to pack a lot of food and water, as you have frequent access to potable water and restaurants.

There is no need to pack your trash with you and no setting up camp since you have access to numerous accommodation options along the way.

The route is well marked making it unnecessary to carry maps or a GPS. You’ll always have company since a number of others will likely be making the journey with you.

The trail is relatively easy to manage whether you are walking or biking. The journey is safe and you’ll usually pass through a number of villages each day in case you need anything. 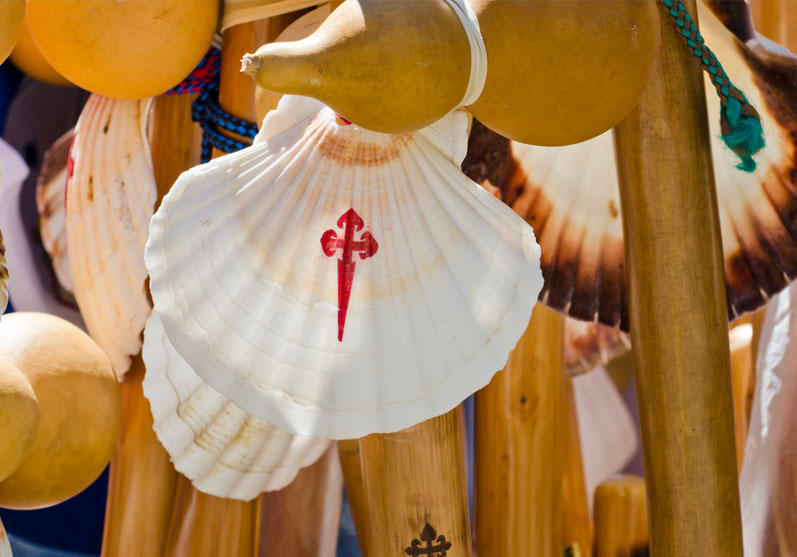 Receiving stamps and the Compostela

Many travellers choosing to walk the Camino de Santiago pick up a pilgrim’s passport at the beginning of their journey.

Just like a regular passport, you collect stamps along the way. You receive stamps by staying in various albergues or refugios along the journey, each one having their own unique stamp.

You can also collect stamps at important monuments and some local restaurants and cafes. The cooperating albergues and refugios are usually run by local councils and churches and offer cheap accommodation.

The catch is you must have a pilgrim passport to be able to stay the night in one. The accommodation is issued on a first come first serve basis.

You can pick up a passport at one of the main starting points to the Camino de Santiago or have it mailed to you before your trip. The goal of collecting stamps is to receive a Compostela, a type of certificate proving you made the journey.

You receive the certificate by walking at least the last 100km of the route to Santiago de Compostela in Galicia from the town of Sarria, accumulating the required number of stamps needed each day along the way. These stamps prove you indeed made the journey.

The certificate replaces the traditional reward that was used to prove you completed the journey to the Santiago de Compostela in Galicia.

Originally, travellers would seek out a scallop shell that can be found along the shores of Galicia as a way to prove they made the journey to the sea. The scallop shell became a symbol of the trail and can often be seen in trail markers.

Many travellers still tie a scallop to their backpacks when making the journey as a way of honouring the past and spirit of the Camino de Santiago.