Best skies around the World

When it comes to choosing a holiday destination, the sky really is the limit.

However, when a beautiful or magical sky is what you seek, there are definitely places that stand out.

Whether you are looking to travel to place which offers the chance to spot more stars than you can count, or somewhere that you might be able to chase the end of a rainbow, we have put together a list of the top destinations around the world where you can witness exceptional skies.

We’ll take you from the deserts of Chile to Norway’s North, to bring you everything from the Milky Way to the northern lights. And just in case the sky happens to fall on your holiday, be prepared by purchasing comprehensive travel insurance to protect you and your family. 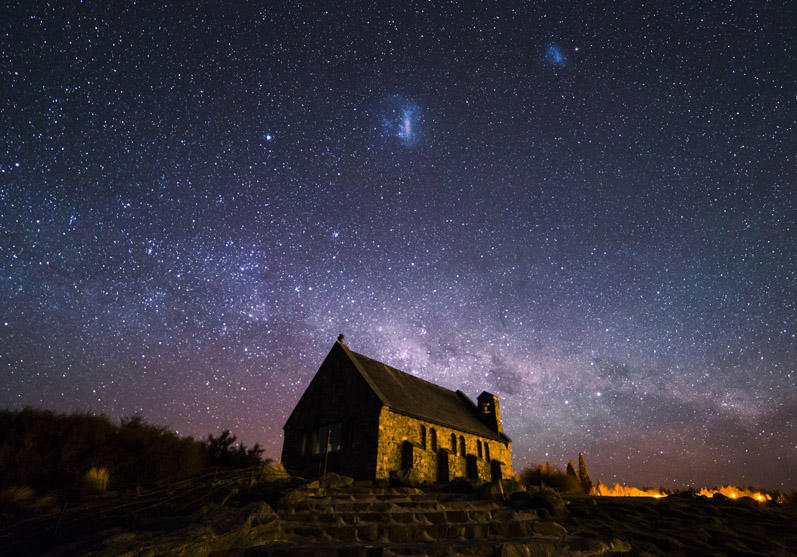 The Southern Hemisphere’s first recognised Dark Sky Reserve, the Aoraki Mackenzie Dark Sky Reserve offers up some of New Zealand’s darkest and clearest skies for peeking into the cosmos.

Restrictions that limit light pollution here mean visitors can be left breathless with stunning views of the Milky Way and distant planets with the help of telescopes. The world’s largest Dark Sky Reserve, Aoraki Mackenzie is situated in the mountain-wrapped Mackenzie Basin of New Zealand’s South Island.

The 4,300 square kilometre reserve includes the villages of Lake Tekapo and Mount Cook as well as the Mount John Observatory. The observatory offers day and night tours where visitors can use high-powered telescopes to witness things like the Magellanic Clouds and the Southern Cross. 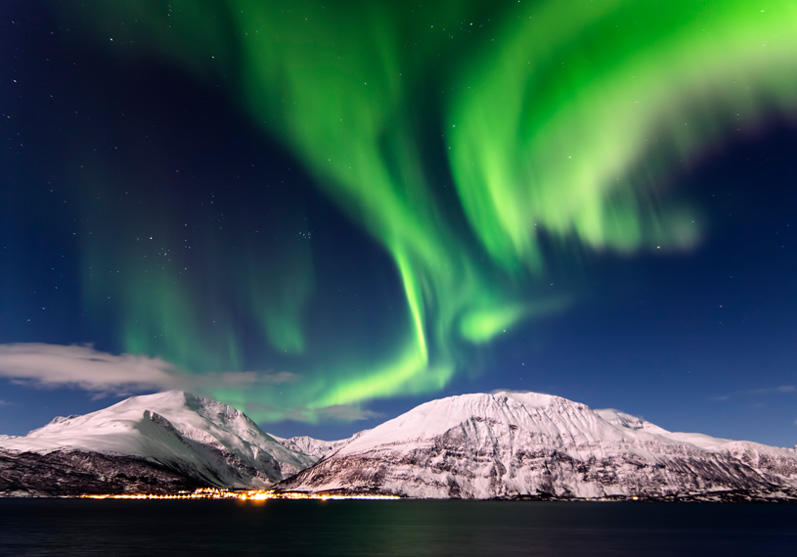 When it comes to viewing the magical colours of the northern lights or aurora borealis, Norway consistently delivers incredible results.

Not many people realise that the northern lights are always happening, even during the day.

It is a good idea to schedule several outings to give yourself more chances of spotting the colours in the night sky. The natural light display is most impressive during periods of the solar maximum, or when solar activity is at its highest. 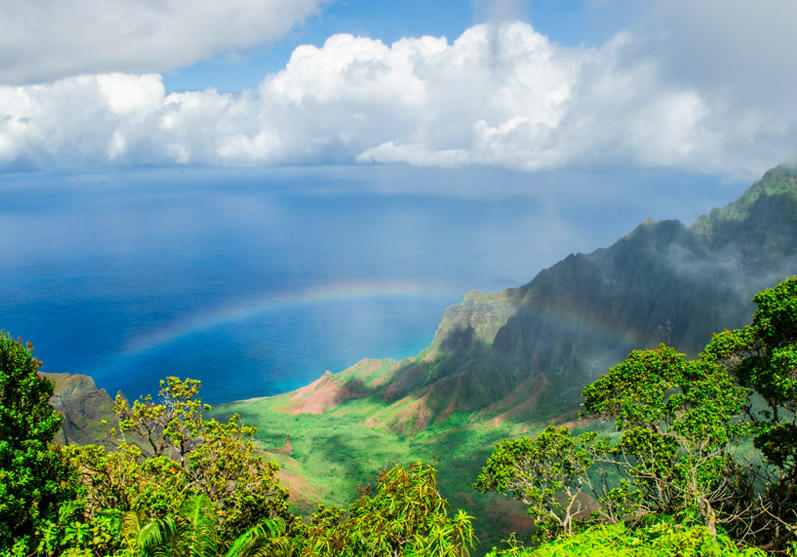 Not all impressive skies take place at night – daytime skies with rain showers about can produce equally stunning colours in the form of rainbows.

Nicknamed “The Rainbow State”, Hawaii is known for its ability to frequently produce rainbows. You’ll even find a rainbow emblazoned on the state’s license plates.

One of the best islands to catch rainbows is Kauai due to its frequent rainfall, especially from 10/to January. The Hawaiian Islands are also known for commonly producing double rainbows, where the colours of the rainbow become reversed in the second arc that you see.

The best chance to catch rainbows is early and late in the day when the sun is low in the sky. You of course need a bit of rain and will need to position yourself between the sun and rain, looking in the opposite direction of the sun.

In addition to its frequent rainbows, Hawaii will soon be home to the Northern Hemisphere’s largest telescope when the Thirty Meter Telescope is built on the Big Island’s Mauna Kea volcano. 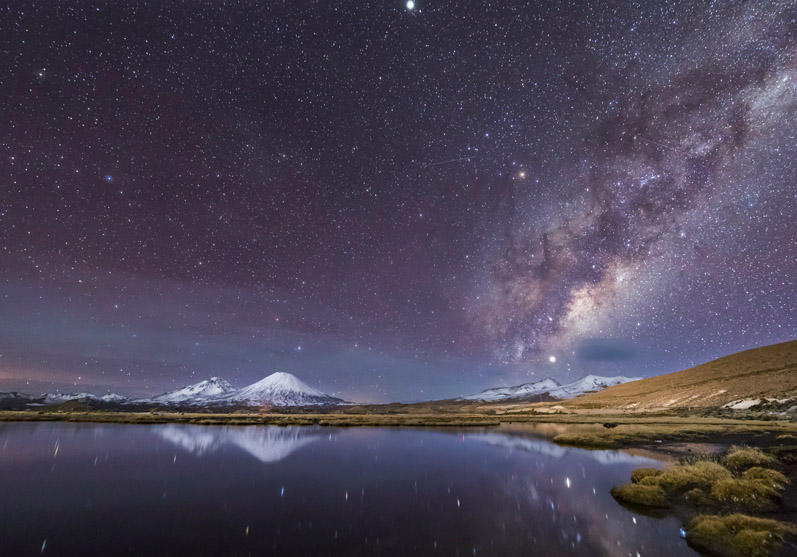 For an otherworldly sight both on land as well as in the skies, Chile’s Atacama Desert definitely delivers.

The regions combination of dry air, high altitude, and minimal light pollution equate to it offering visitors and astronomers the best place to study the night sky. The Atacama Desert is home to the Atacama Large Millimeter Array (ALMA), with its more than 60 radio telescopes.

The area is also littered with high-tech observatories, many of which offer up intriguing tours such as those offered by the Cerro Mayu Observatory or the Cielo Sur Observatory. If you’d rather feel like you’re walking on the moon rather than spying on it with a telescope, head to the Valle de la Luna, or Valley of the Moon.

Located in the Los Flamencos National Reserve, the area provides visitors with otherworldly rock formations and dunes. The Valley of the Moon can be access from the town of San Pedro de Atacama. 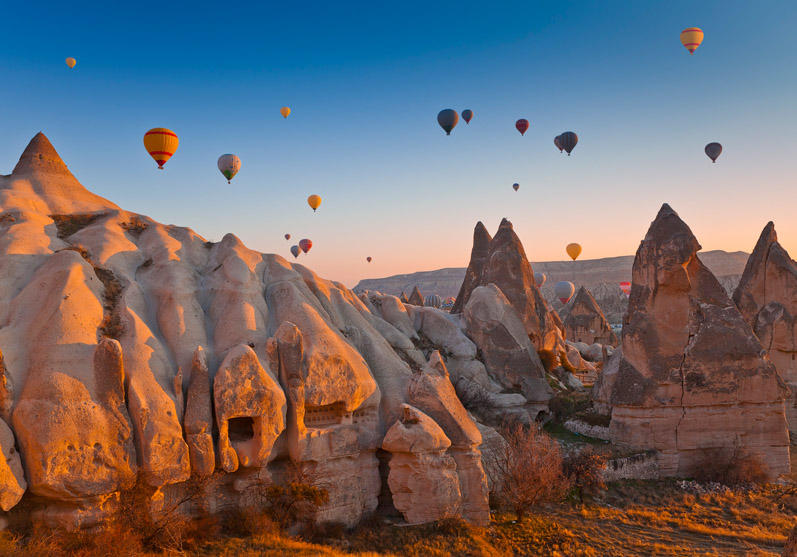 Not all impressive skies are produced by nature, human ingenuity has helped to create one of the most colourful skies over Turkey.

Home to the notable rock formations known as fairy chimneys, Cappadocia is also recognised as the world’s hot air balloon capital. On any given year, around a half a million people take to the skies in hot air balloons over the historical Cappadocia region.

This equates to nearly 50% of all balloon trips worldwide. A good place to set yourself up in is the town of Goreme, due to its abundance of hot air balloon tours. Visitors can enjoy hot air balloon flights year round and you will often be accompanied by around 100 other balloons in the air during your flight.

The sight is something to behold and seems like it should reserved for a special festival. Whether you plan on simply catching photos of the spectacle from the ground or actually becoming part of the display in the sky, a visit to Cappadocia will not disappoint. 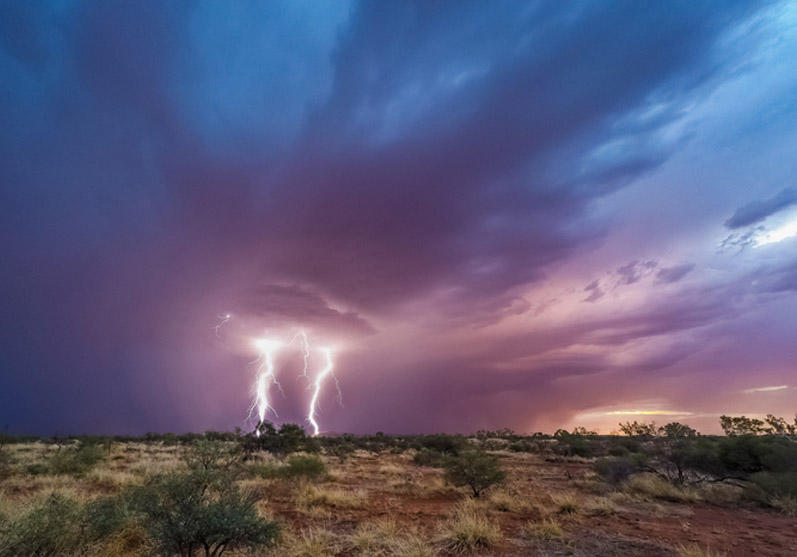 You don’t need to travel far to catch sight of incredible skies, Northern Australia is the lightning capital of the country, where large thunderstorms are commonplace.

Places like Derby and Kununurra in Western Australia as well as Darwin in the Northern Territory are the top spots to catch lightning-filled skies.

Arnhem Land’s Bininj Aboriginal people believed lightning was created by Namarrgon or the Lightning Man when he attached axes to his body and split the clouds as he travelled. Whether you wish to see lightning or not, the fact is it does frequently occur in Northern Australia.

The phenomenon, although beautiful, is something that should be respected and proper safety precautions should be practiced when lightning is about. Dozens of people are injured and a few tragic fatalities occur every year in Australia due to lightning.

Seek shelter immediately if lightning is in the area, making sure to stay away from windows, concrete, water, plumbing, and electrical equipment. If you find yourself in the bush, stay away from tall trees and try to place yourself in a low spot where you are not the tallest object.