These are the best ways to check out Sydney’s Vivid

31 de May de 2018
Home » Blog » These are the best ways to check out Sydney’s Vivid
Sydney will once again light up the night skies this year when Vivid kicks off on 05/25. This year will mark the event’s 10th anniversary, and will run over 23 nights.

Vivid is the Southern Hemisphere’s largest party of ideas, music and light; a free public exhibition of outdoor lighting, creative visions, and illuminations on Sydney’s most iconic landmarks.

The city will offer an abundance of exciting music performances and light installations from Darling Harbour to the Taronga Zoo. The following are the best ways to immerse yourself in the experience. 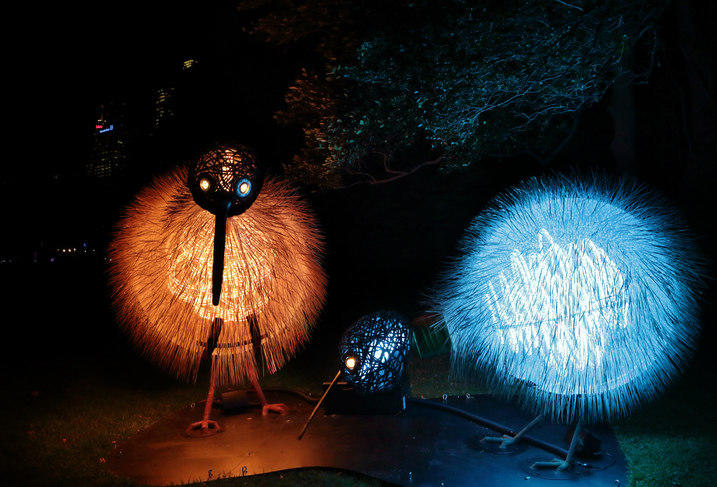 Considered to be the true stars of Vivid, the creative lighted sculptures can be found throughout the city. Visit The Rocks to see Fugu, a glowing version of the famous poisonous pufferfish that will captivate onlookers as it expands and pulsates with colour.

Head over to Darling Harbour to dive into a glowing underwater world without getting wet. The light and laser experience features magical jelly fish and corals.

Meanwhile, Taronga Zoo will present over 200 lighted wildlife sculptures depicting rare and endangered wildlife. If you’re looking for something a bit more interactive, you’ll find Aqueous at the Royal botanic Garden. It features a network of lit trails that react to guests as they run or walk. 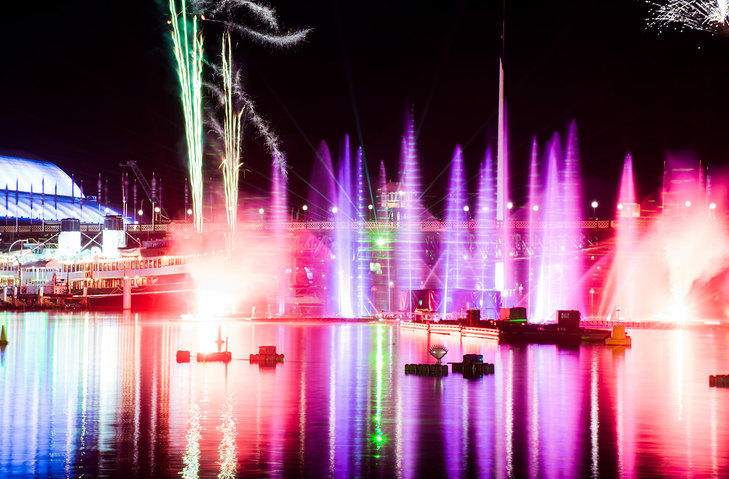 Equally as astonishing as the lights on offer are the music acts. This year’s performances include Ice Cube, Mazzy Star, Cat Power, Alison Wonderland, and Vera Blue. Sydney’s theatres and iconic opera house will host the talents and showcase their latest and most memorable hits and sounds.

Be sure to check out the 90s masquerade-ball-rock-show, Young Hearts Run Free. The show and its performers will showcase hits from the famous soundtrack produced for Baz Luhrmann’s Romeo + Juliet. Catch memorable hits from Radiohead, Everclear, and Garbage. 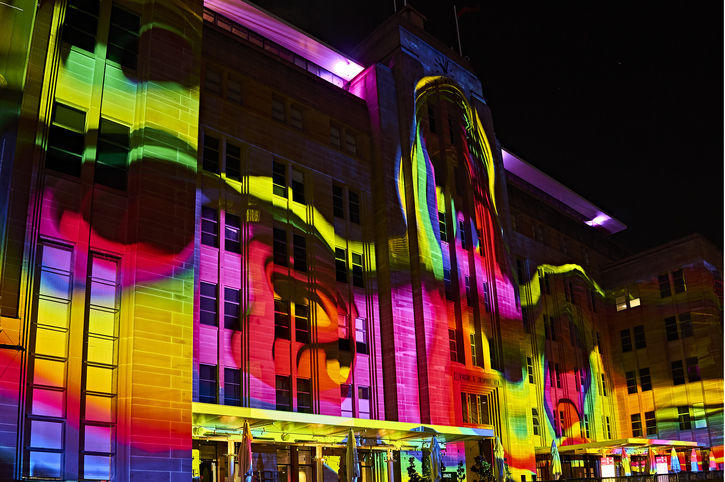 Vivid will also include famous guest speakers such as Titanic creator James Cameron, who will be discussing science and technology. The Art Gallery of NSW will host a series of talks revolving around taboo subjects while environmental activist Peggy Oki and marine biologist Laura Wells talk about saving the world from plastic pollution at the Museum of Contemporary Art.

There will be a filmmaking conference, virtual reality workshops, and discussions on how we can and should make our cities safe and accessible for people with disabilities. 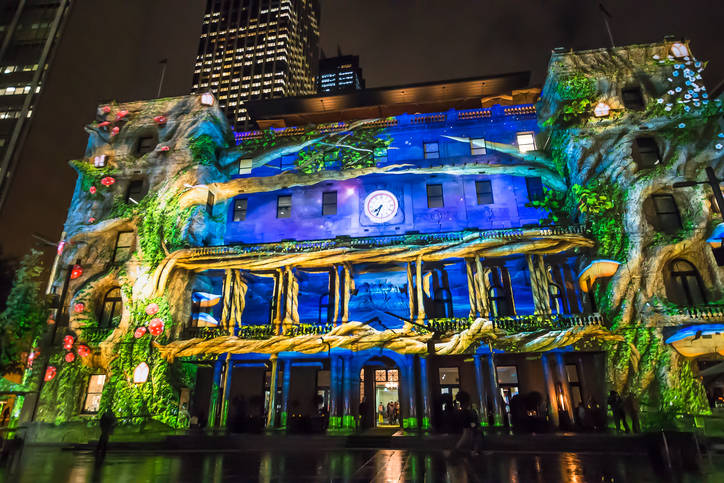 Be amazed as some of Sydney’s most well known landmarks get lit up with artistic displays. Snugglepot and Cuddlepie, early children’s storybook characters, will grace the walls of Customs House while the Harbour Bridge’s southern pylon will feature indigenous dance with the EORA-Dark Emu projection feature.

For the first time in Vivid’s history, Luna Park will also light up this year. A grand projection called the Spirit of Fun will light up the park, featuring characters and art that will travel its walls to tell the park’s history. 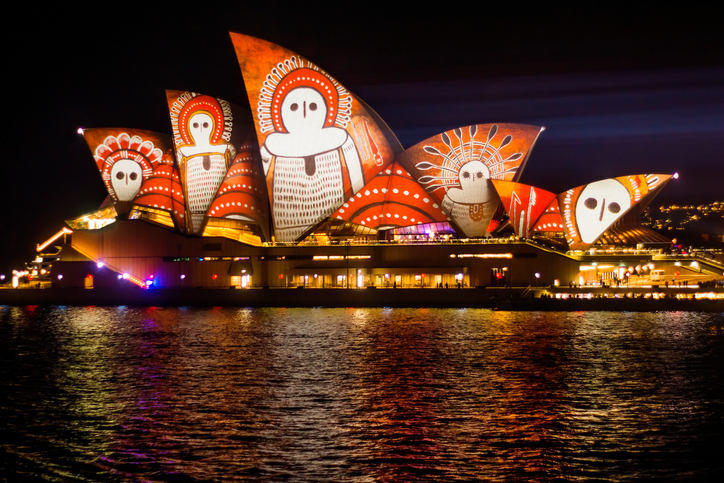 Of course no light projection is more famous than the lighting of the Opera House’s sails. This year the sails will feature the artwork of Jonathan Zawada, who will display hyperrealistic images in bold neon colours that will take inspiration from Australian flora.

Be amazed by the three dimensional geometric designs that light up the sails from the creative mind that brought you Flume’s “Skin” album cover. 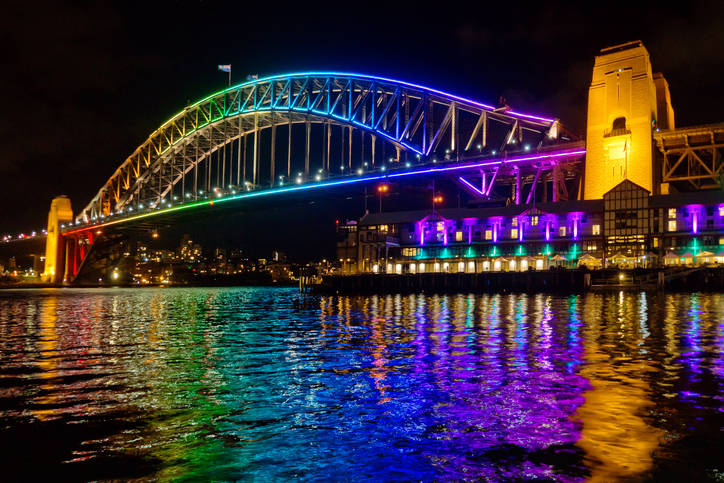 Climbing the Sydney Harbour Bridge is a memorable experience anytime, but even more so during Vivid. Put on your flashing lighted vest and take to the climb at night to see all of Sydney lit up like never before. If the thrill of reaching the summit wasn’t enough, you will also be able to bust a move on the bridge’s new illuminated multi-coloured flashing dance floor.

If you can’t make it to the top of the harbour bridge, be sure to keep an eye out for the massive beams of light coming from Bradfield’s Beacon, a new custom built laser that will be positioned on top of the bridge.

Things to keep in mind

Viewing most lighted art installations will be free of charge but there 05/be fees associated with musical acts, shows, or talks.  There will be major city road closures and extensive parking restrictions in place each night during Vivid, making public transportation a better option to reach all the attractions. You can use the Trip Planner tool available at transportnsw.info and keep up on the latest event transport and traffic information at vividsydney.com/transport.

And although there will be plenty of lights to admire in Sydney during Vivid, remember that the brightest idea is to always protect yourself with quality travel insurance while travelling within the country or abroad.